when i had crimson "distract" forty Eulogy disappeared and forty and crimson stand next to the terminal together seemingly indefinitely. they haven't moved after numerous in game weeks --Warhammerork 21:52, 2 February 2009 (UTC)

he has dialog involving the replicated man quest,stating "I've got a lot of people on it,and you better not be looking for him too" and i'm fairly sure theres a holotape for it in his pad,should this be added to the page? also unrelated,the barter check for clover is 50 or lower,not 60,as i paid 500 for her with 50 barter--JoeHanSon 00:21, 12 June 2009 (UTC)

if I kill eulogy does the town become hostile? even if I do it steathily?

I killed Eulogy & Crimson whilst having Clover in my employ and the town's slavers did not become hostile. (I should note that I had my minions wait for me elsewhere in order to avoid any complications with them jumping into the fight. Also I have Sneak at 100 and was wearing Chinese Stealth Armor; however, I suspect you just need enough sneak to pull off a reverse pickpocket action.) I waited for Eulogy to return to his pad and then did a reverse pickpocket of a live grenade onto his person when Crimson was standing right next to him. That tactic resulted in a simultaneous take out of that pair. Be cautious, I waited a few game hours and then proceeded out into the town square. No hostility was encountered. Growl-tiger 21:35, May 11, 2010 (UTC)

I have Fallout 3 for Xbox 360 and after entering Eulogy's pad for the first time everything was fine but the second time I entered he was there and just wandering around, so I decided to look around for Quantum (Just come back for the Nuka-Cola Plant) come back to see Eulogy and nick his stuff (mwa-ha-ha-ha!) but he wasn't there! so I had a look around his pad and the rest of Paradise Falls, still couldn't find him so I headed back and I hear him talking to Clover, so I look around, still can't find him, then I look up... to see him and Clover with there heads embedded in the roof, well Eulogy's head was but Clover was attached by the left arm (scope helped out there) Has anyone else seen this or is it just a random (but funny) glitch?

I am just adding this as a note, and it might want to go onto the page: Under the 'Bugs' section, when it says that Eulogy sometimes disappears, sometimes he is just in a remote spot in Paradise Falls. I searched all through paradise falls and around it when i thought he had disappeared. I read that sometimes he is in Cutter's Clinic sometimes, so i go in there. I go into the back hallway and he was being blocked in the far-back corner by Cutter, Clover, and Crimson. On my guess he was there for about 2 game weeks until found him.

>Confirmed; he seems to get stuck in the clinic from time to time. It should be suggested that if the player can't find him in his house or just outside of it, then the player should look for him here.

Also check Lock And Load as he may be making his rounds collecting his cut of either Cutter's or Pronto's action. But, yes, Eulogy does have a tendency to get stuck inside of the back room that Cutter inhabits. Engaging him in conversation appears to liberate him. Growl-tiger 21:39, May 11, 2010 (UTC)

Just made a note about the disappearance during the quest Rescue From Paradise about the possible location of Eulogy, can someone confirm this by going into the clinic after distracting Forty? Age of Freedom 18:15, July 5, 2011 (UTC)

Picked his pocket, killed him... no one cares

I picked Eulogy's pocket in his main bedroom while he was sitting on his couch and Crimson was sleeping on his bed. I have no clue where Clover was. Then, Eulogy got in an argument with Crimson and left her in the bedroom. He sat at the bar by the front door, and I was able to drop a frag in his pocket without anyone noticing. No one in Paradise Falls is hostile towards me. I honestly had no clue this was thought to be impossible - I did it without even worrying about his 'bodyguards' seeing me, and no one has changed whatsoever after his death.

I also saved right before I dropped the grenade (as he kept catching me), so I tried buying Clover just before doing it. She's now on my side and everyone is still cool with me.

I can't right now confirm this, but I imagine anyone can try it. I was doing it at night, and Forty was in to Eulogy's house to argue over his pay. It wasn't the easiest to do, but it was definitely possible.

I should have read this before I added my above comment. So I will add that you can neutralize all the slavers in this fashion so long as you take them out when they are isolated from the rest of the pack. That is they must be alone and far enough out of range that the target's associates cannot detect the hit. My tactic was to assassinate the straggling slaver as they all head off to the barracks at night. Growl-tiger 21:43, May 11, 2010 (UTC)

Seriously, i guess in the wasteland they completely forgot about history.

HE'S BLACK! And he's the slaver leader! Do you see the dissonance or am I just crazy here?

What dissonance? Who do you think captured most of the black slaves sold to the white slave traders on the Africa coast? Hint: it wasn't little green men. Granted, traditional African slavery was usually considerably more humane than an American plantation, and so the black slave traders of Africa may not have fully realized what they were getting their brethern into. Still, a very large number, perhaps the majority, of the black people who were shipped to the Americas had been shopped by other black people. Wunengzi 09:07, August 27, 2010 (UTC)

^he's right.. however the top comment is still funny hahahaha

Eulogy's bed can't decide about you 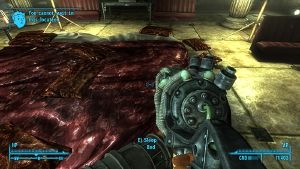 After I had killed all the slavers, including Eulogy, I decided to see if it was possible to sleep in his big bed. As can be seen from the screen shot to the right, although you are told you can press E to sleep, the only result if you do so is a warning message in the upper left hand corner telling you that you cannot wait in that location (PC).