Note When Fighting Enclave near an Eyebot, it will attack you.

I've read in other places (IGN I believe) how if you attack an eyebot a vertibird will come down and offload some Enclave soldiers for you to fight. I have attacked 2 eyebots, killing one and just wounding another and letting it shoot me for awhile. No Enclave. Can anyone confirm this? I have not found Dad yet, so maybe it's a triggered after a certain point in the main quest. If I find this to be true, I'll come back and edit. This is supposedly a great way to gain entrance to the Outcast base as they really like the Enclave armor for the trade ins.

I think that only becomes active AFTER the Enclave appears, like after Waters Of Life. Firelance 00:22, 19 November 2008 (UTC) 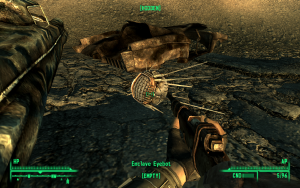 There is possibility that Eyebot will not explodes when killed. I'v seen battle between Eyebot against Radskorpion with two Bloatflyes in which Eyebot was killed but not destroyed (no loot inside). Another one which I'v seen was killed (not destroyed) by some Raiders, there was Scrap Metal inside. --Gold Raven 14:42, 18 December 2008 (UTC)

I can verify this on the PC, playing on Very Hard. Eyebots killed by NPCs and creatures sometimes do not detonate. They contain Scrap Metal or nothing. Dthvirus 21:50, 29 January 2009 (UTC)

The Vertibird summoning eyebot variety comprises 56 of the 117 total eyebot spawn points. Looking at the script in the GECK, it appears that luck is a factor; bad luck means a higher chance for a visit from the bucket-head brigade. Makes you think twice about popping eyebots, huh? --MadCat221 08:06, 29 December 2008 (UTC)

I noticed someone jsut removed the claim that raven rock houses eyebots with organic brain, claiming they are robobrains. Can anyone confrm they are robobrains, or was the original claim right, and the editor assumed they were msitaken> -DragonJTSLeave me a message 18:08, 1 May 2009 (UTC)

And it was a rbobrain. Don't know how anyone could have missed the size difference. -DragonJTSLeave me a message 22:15, 1 May 2009 (UTC)

"Notes" section - the wastelander / Eyebot encounter is not tied to Grayditch

According to this page, the encounter with two wastelanders discussing a hovering Eyebot is just one of many possible random encounters. It does NOT always occur in a given location (such as Grayditch). Just in case someone cares enough to edit the article and correct this info. P.S. If you shoot the Eyebot during this encounter, the explosion from its demise can actually kill one of the wastelanders without incurring a Karma loss or turning the other wastelander hostile (happened to me, but he didn't have any worthwhile loot). Hope this helps!12.204.48.130 07:01, 30 May 2009 (UTC)

I change the yua gui to "Yao Guai". tztz

Who is this "Mr. Ganrow", and can there be a citation for this? I'm suspicious of it...

Anyone with the GECK care to get the stats for the Zapper weapon and create a page? Or is it really just a laser pistol bolt? Ishotamaninnewreno 01:55, February 6, 2010 (UTC)

Everytime I kill one of these things, it appears that they have flesh on the inside, sometimes even a small skull/head ==

I know it's a longshot, but if you destroyed every Eyebot would the Enclave stop transmitting? Would the radio signal disappear from your Pip-Boy? I know you probaby couldn't, as they'd respawn at some time, but I'm sure some people would try and destroy every Eyebot just to stop Eden's mindless wittering. TobiasSmith 20:45, July 7, 2010 (UTC)

Appearance in the Mojave Wasteland

It was said that a single Enclave Eyebot would be found in New Vegas. If so, does it broadcast some kind of signal or does it just float around?

hey, does ne1 think ED-E is a good companion, coz, lets face it, he is only a eye bot and the eye bots in fallout 3 were pretty weak

First, please sign your posts. Secondly, he's a great companion because his perk not only increases your perception, it shows cloaked enemies(nightkin). Also, ED-E stands for Eyebot-Duraframe, which causes him to be extremely durable. I Always travel with him because rex can't compare to dogmeat.--Icommandoxx 01:57, February 18, 2011 (UTC)icommandoxx

I'm not sure If i'm the only one who cared, but I figured I'd mention this. I personally hate my megaton home , all the themes are crap to me. So after beating OA and clearing it(and saving olin via reverse picpocketting hellfires) i decided to make it my home. I figured I'd make a enclave theme. I invested fully in crow, got the custom eyebot helmet, and was amazed. It looks perfect for a enclave basecamp. Too bad there aren't anymore than the one in the sewers and crow's.--Icommandoxx 02:05, February 18, 2011 (UTC)icommandoxx

I'm going to delete the line in the Notes section that says 'shooting near an eyebot will not cause it to turn hostile' or something like that. The reason I'm gonna delete it is because this is true with every character and creature in the game.--Wiseman of the Wastes 13:21, July 5, 2011 (UTC)

I'm beginning to think that a split is ill-advised in this case, since the only eyebots in FNV are 1) ED-E, 2) cut content, and 3) a single static object in a single place barely mentioned in dialogue in the game. Perhaps it's best to put things back the way they were and make this overview page cover the subject on its own. --Kris

I more or less agree, but I think that the Fallout 3 one should remain, as it has a strong presence in the game, and the overview one will encompass Eyebots overall. That way we can keep the statistics template out of the overview page, keeping it nice and neat, as well as seperating it from the more precise descriptions from Fallout 3. That's my two swedish Crowns anyway. -- An addendum to that, I think that we should try to stick to Vault principles and guidelines as much as possible, to maintain consistency. A small exception leads to three exceptions and so on, and soon enough, the specifications are lost in a see of exceptions, exceptions becoming the norm. Hugs Scar: "Say 'ello to my little friend!" 16:54, August 14, 2011 (UTC)

I disagree, there needs to be an overview page for this which contains mainly the lore side. While the respective pages cover more of the gamplay side. This is for 2 reasons, generally consistency across the wiki. Plus, the whole idea of an overview page was to replace disamb pages with more than just simply links. Especially when there is actually more than one variant of eyebot in terms of lore.

Concerning the eyebot from Navarro which the Courier took to the Divide, that contained the launch codes that destroyed said commmunity; scrambling Ulysses brain until he can only speak in cryptic, esoteric, often contradictory fragments... Anyone have an idea what the markings were that they recognized as being from the military bases around the Divide? I mean a flag would be nothing, though I believe it's stated that it had the Enclave one on it. Beyond that I imagine there would have to be something specific to those bases, and not just of the American government, military, or any other branch. So perhaps someone has noticed symbols that are unique to the Divide map that might be good candidates? 207.161.213.187 18:15, 17 March 2017 (UTC)

Clearing up the Lonesome Road Eyebot

The LR-ED-E is both a copy of the Navarro eyebot, and possesses the east coast ED-E's (Eyebot duraframe subject E, found in Primm) memories. Ulysses states that the Divide (specifically his temple?) made new eyebots from the Navarro one the Courier brought, and the rest is indicated I think in the first convo w/ LR-ED-E. However, several articles have this a bit jumbled. For instance the Divide page uses a link to the EC ED-E page when referring to the one that 'went through the Divide'. Though I just changed that to 'near the Divide' to keep it consistent. However it still needs to be sorted out and I don't want to overstep my bounds. I think it would be less confusing if at least the Eyebot page had an entry for the Navarro eyebot, and they are a distinct unit w/ a significant role in the story. So it seems appropriate that it would even have its own page.207.161.213.187 21:02, 17 April 2017 (UTC)