Just ahead of the 2 wastelanders I also found a female Bright Follower's corpse. It might not be easily noticed with all the dead coyotes strewn about. Can anyone confirm? --Phiont 20:27, October 31, 2010 (UTC)

The corpse's I found were generic. That is neither one wore the garb of the Bright followers. I changed the wiki article, but it was reversed. Can anyone corroborate that any of the corpse's were Bright followers? At the time of the discovery my character was level 30; this was on the Xbox 360.

There are three corpses in the cave, two wastelanders and one of a ghoul: 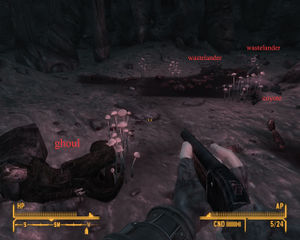 I got a Bright Follower. Also, he had a Laser RCW - nice find, though I hardly have any ammo for it.