Why is there only issue (Number 14#) found in Fallout 3? What happened to 1-13# issues? Is the second Grognak the Barbarian comic in Vault 101 truly guaranteed? If you read the first Grognak comic before finishing the birthday party scene, will a magazine still be in the drawer at the start of the Escape! scene?

I had thought that the magazine was there because I had not read it (was saving it until I got the Comprehension perk). LoneWanderer 18:02, 6 December 2008 (UTC)

While spending half an hour looking for a copy of the barter book (number 18) Tales_of_a_Junktown_Jerky_Vendor i started to figure out that something was wrong , so i pick my prima guide and start cheking every single location and found this as the possible reason :

A vertibird swoops down and lands on the section of broken freeway near the Temple of the Union . Once the Enclave arrive (after you finish Miscellaneous Quest: Head of State), you can claim these books from the shack tables: Tales of a Junktown Jerky Vendor, Grognak the barbarian and a pre war book.

Confirmed: Ok I now checked it out. The books in the raider-camp on the highway near the Temple of the Union will ONLY spawn, if the enclave has shown up the first time, and this means you must have done the Quest in Jefferson Memorial, where your father is killed in the rotunda. IF the quest "Head of the state" must be done also I don't know (but assume it). After doing both quest and going from scrapyard to the temple of union a enclave helicopter dropped enclace troops on the highway near the (now fully spawned) raidercamp, the raiders easily being killed by the enclave. Both books where there in the raidercamp. This means that the information on the mainpages for both books are wrong, till now telling that solving "Head of the State" is enough to spawn the books. I will not change those two tables. Maybe someone encouraged enough can do this. Thanks.

I have not done that quest yet so i cant confirm it right now but that may be the one Grognak issue missing (because number 1 and 2 are the same). Buttbreath 05:35, 21 December 2008 (UTC)

Grognak is probably a THUNDAR homage...

There was a post apocalyptic cartoon in the 1980's that fits with the whole Fallout aesthetic A LOT more than conan does. I could be wrong, but peep this youtube vid and tell me you don't agree...

Look at the picture on the cover of the book and follow the "virgin's" eyes.

^Artwork from the Elder Scrolls 4:Oblivion, if one chooses the premade Barbarian player class. Grognak is a slightly recolored, edited version of this barbarian, down to the pose and battle axe.

As far as I can tell, there is no Grognak at The Tops as indicated by this poorly-described entry (which also appears on the main skill books article):

Found (stealable) in a bedside desk on the hotel room floor.

Also, this would constitute a fifth instance of the book, but there are only four of each. I don't think it's there; someone please confirm that this location should be stricken. Blackmonolith 22:57, October 26, 2010 (UTC)

Unable to find this Grognak myself after searching all the hotel rooms (except one that requires a key). Seems unlikely to me that there would be a Grognak and a Pugilism both in hotel rooms in the Tops. --IlbJanissary 06:55, October 27, 2010 (UTC)

The room requiring a key is the high roller's room and there is no Grognak book in that room either. I've checked every container on the hotel room floor three times and have not found a Grognak book. I did find two magazines however, one of which was a True Crime magazine (+10 crit).

Appears to be vandalism. There is also now a claim that there is two in the Atomic Wranger Safe. Skill books never appear containers but only out in the open in New Vegas.

Grognak is a partial anagram to Agronak from The Elder Scrolls Oblivion, with a&g added to the name and letters mixed up, it became Grognak Grog nak Agro nak 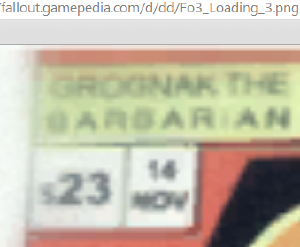 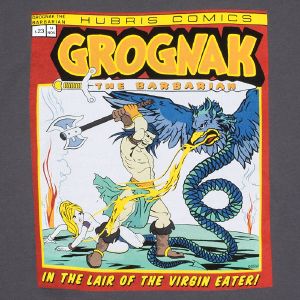 That's also a super blurry image. Here's what the official Bethesda shirt showed, which I mostly based my recreation on, and can clearly see a period between the dollar sign and 23. Shadowrunner(stuff) 01:37, 25 June 2014 (UTC)