Not So Ugly After All...

I figured Lanius would have a face for radio. I mean, after hearing a story like that about him, you'd think that after prying his helmet off, you'd see a face made of Spam or something. Kinda sad :( Malus X 23:24, November 5, 2010 (UTC)

I think that was just a story gradually made up because he's the big scary guy in a big scary mask. I mean, it's so hilariously exaggerated. The guy used to ambush whole leggionaire groups by himself, killed his tribe when they wanted to surrender to the legion, and only stopped when they RIPPED HIS FACE OFF.--201.3.190.83 05:54, December 18, 2010 (UTC)

Is he the tallest NPC in the game? I mean, he seems super big when you stand before him. Like 7 foot or more (in relation to the other NPCs and the player's height).

With good karma or a Speech skill of 80, you can persuade Lanius to fight you one-on-one. This option seems to appear if you fail one of the Speech/Barter checks beforehand.

It makes logical sense that the stories about him, are just stories. The real version is that he was a full legionary by 12 and that such.

All the evidence points to the stories, being stories.

Apparently his voice remind me of Teal'c. Anyone else also thought the same?

When I killed Lanius he had some legate healing powder on his corpse. There is no page fo this and I am bad at making pages. Just thought I would point that out. Frantruck 20:40, December 8, 2010 (UTC)

Yeah, I killed Lanius by acidentally insta-killing him (with a bring him out of his camp) glitch. When he died he dropped 3 "Leg. Healing Powder"s. I assume this is what he uses to heal with mid battle. Chaos ian7 01:11, December 22, 2010 (UTC)

The same thing happened to me, except it was four "Leg. Healing Powder"s I think. I fired a mini-nuke at him and made a direct hit at his feet. It only removed about half his health but the blast shot him about fifty feet into the air, which meant that he died on impact when he fell back down (threatening to do horrible things to me all the way down -- quite funny, actually). You probably only get these powders if you manage to kill him fast enough so that he has no chance to use them up Wunengzi 06:25, February 19, 2011 (UTC)

I agree that there needs to be additional clarification (either here, or on the Healing Powder page -- probably both). Can you obtain the Healing Powder from the Legate Lanius (as though he were a vendor from whom you purchase it) -- or is it something he only has and keeps. I.e., the only way you get some is to kill him before he uses up his limited five supply?

I came to believe that perhaps, even though it is not indicated, Joshua Graham and Lanius may be one. Graham was Caesar's friend for a long time, even before the Legion came to be. Lanius says that Graham deserved the fire that Caesar blessed him with, which could explain why he constantly wears his helmet and armor. I found Lanius' given background was weak:

Interestingly, there seems to be several spoken versions of Lanius origins, and he himself appears to be surrounded by myths. Lucius mentions that Lanius was already a Legionnaire by the age of 12, which doesn't fit well with Caesar's story about him. Also, Lanius is said to be a brutal savage, and hate the Legion, only leading it because of his respect for Caesar. In-game, however, he is much smarter and noble than a savage could be, and seemingly has no grudge against the Legion itself.

But this is all theory.

Graham is the Burned Man, not the Legate. The Legate is simply a disastrously intelligent psychopath. Kind of like Hannibal Lecter, except a military leader, not a carnivorous psychiatrist. http://images1.wikia.nocookie.net/fallout/images/0/08/Personal_Sig_Image.gif Tagaziel (call!) 00:23, December 9, 2010 (UTC)

Shit, I'm a combat-oriented level 34 and I am too scared to fight the Legendary Deathclaw and it's minions. But now I look at this guy, able to run faster with broken legs and heavy armor than the fastest Courier wearing light armor, and now I know who would win. Lanius could take on the Legendary Deathclaw any day, and could clear out Quarry Junction easy. Oh man, if someone made him an ally with console commands or a mod, then they would be unstoppable. --TJbrena 16:36, February 7, 2011 (UTC)

He's stoppable because like all NPCs he's dumb as a sack of hammers. Just put a minefield between yourself and him, for instance. He'll run right through it. Wunengzi 06:29, February 19, 2011 (UTC)
He's also incredibly easy with the YCS/186. I had Better Criticals, Bloody Mess, 100 Energy Weapons, took one slasher and 2 psycho, and landed a sneak critical (on the head, of course) and he died in one shot. Tested on "Hard" difficulty (I usually play on normal, so I wouldn't know if this would work on "Very Hard").

Lanius will ask if it's some sort of insult that you're wearing legion garb. (I was wearing Caesar's :P)

Place enough C4, lure him into a it, blow it up, watch how he flies :D, now seriously he is a little too easy compared to any other final boss i have ever seen lol, even tough i must admit he makes a helluva lot damage, also i got a question, does poison coated throwing knifes/hatchets/spears affect him? or his armor avoids poison?.--Nuke-a-Punch 04:02, January 7, 2011 (UTC)

If only Tremble actually slows him down. His speed makes him extremely annoying. Knockdown from an axe makes him much easier to deal with. ZirePhoenix 07:51, February 25, 2011 (UTC)

Is it possible to retrieve his armor on xbox and continue the game??

Playing for the Legion, before starting the Battle for Hoover Dam (Veni, Vidi, Vici - the last quest), you enter Legate Lanius' tent. After you entered the tent, before the Legate starts conversation, he actually sacrifices people to Mars! This should be included. This article includes a sentence about the Legate and his "relationship" to Mars. It can be implemented in that sentence.

this is true i also think that its a big slap in the face when you remove his mask as it clearly says it was made my the legion to cover his half burnt face it would of made a nice bit of interesting detail to actuly get a kind of reward at the end of the game. id also like to carry on playing wilst wearing lanius's armour and mask as it makes a great trophy to be ohnest.

Mere minutes ago, I finished the quest "Eureka!" I saved before confronting Lanius. I approached him, and did the diplomatic thing. Then, I decided that wasn't a good ending, went back to my last save, and blew him apart with a Ballistic Fist! lol, Good luck to all who face him!

I think Caesers story is right but that Lanius Face healed long ago but Caeser wants to keep spreading that his face is damaged to make people scared of the Legion--Kanto's Champion 11:40, May 13, 2011 (UTC)

The picture with his helmet off...

It isn't canon, as the player is never meant to see him without the helmet. His face is meant to be severely damaged. Should be noted in the caption.

So I made an edit to the 'behind the scenes' section, containing a mention that it's likely that the character's mask was partially based on the 1974 post-apocalyptic movie 'Zardoz', where a group of people called the 'Brutals' (and a champion class of them called the 'Exterminators' - "the Chosen [of Zardoz]") go around wearing a very similar mask, in honor of their god (who glorifies battle, war, etc -very similar to Mars), made in the image of their god, and supplied a clear enough picture from the movie of the mask (Picture being included in this talk section). 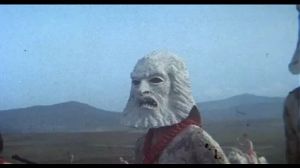 Now while I think the edit I made could have possibly been refined, it was instead subsequently edited out by another user because they found "not it too similar" -hence why I'm taking this to the talk section for further consideration.

Now, the similarities I present are thus: 1) Firstly, it has a very similar look (at least, from my perspective -noted points I find similar, the general expression on the face, blacked out eye holes, a beard, and similar cheeks, the main differences being that Laniuses has a roman helmet). 2) The purpose of the look -which is to be in the shape of their worshiped god/god of war. 3) The masks are worn by "the Chosen [of Zardoz]", and Lanius wear's it because he is Caesar's/Mars' Champion/Legate.

The intention was also to show it as a "possibility" that this is what it's based on, or in the least looked upon for inspiration, not as a definitive fact (until verified by a developer).

It's quite a good "b-movie", and it does have some pretty cool visual effects for a movie made in 1974, also has the shocking image of Sean Connery in "a red nappy, knee-high leather boots, pony tail and Zapata moustache.", which you can see an image of here, it's also post-apocalyptic, so it's watchable, but definitely not the best post-apocalyptic movie around. Toyb 12:54, May 22, 2011 (UTC)

I've seen the movie, too. I removed the behind the scenes entry. I just don't find the mask very similar. Very different facial hair and expression. As for "blacked out eyes," that's because they are masks. Masks have holes for eyes, so you can see out of them. I don't find the parallel of Zardoz's chosen and Caesar's Legate very compelling.

Others should feel free to weigh in. I just find the similarities superficial and subjective. My two cents.--Gothemasticator 13:14, May 22, 2011 (UTC)

While I see only the physical similarities on the helmet and don't really get any of the backstory behind the two, I think the note should be added, because they do look quite similar. --With care and happiness, Supermutantslayer450' YOU. LOSE. 16:14, May 22, 2011 (UTC)

Have you got a reference for it actually being based off of it? Just because it looks vaguelly similar to a mask from some B movie doesn't warrant an inclusion. Wyrmalla 12:39, June 3, 2011 (UTC)

If Lanius is never seen without the helmet, then this "similarity" is based entirely on "well, if he took the helmet off, they would like kinda like each other." With the helmet, there's no way.--Gothemasticator 14:05, June 8, 2011 (UTC)

Can someone give me the console coomand for Legate Lanius' armor?

Hey guys ive tried out legate lanius' armor cheat on pc and it says that i have it in my inventory but it doesnt show up. Can anybody help me out as to why?...

Courier shot in the head twice

About the note, "■Oddly, when speaking to Lanius when fighting for the NCR he will comment on two bullet wounds upon the Courier's head, indicating that the Courier may have been shot before his encounter with Benny." Didn't Benny shoot twice? 81.231.240.73 11:07, August 17, 2011 (UTC)

Yes, he did. I removed that note, thanks for the heads-up. --Kris