Who are the 'helpers' referenced?

I thought only the upper levels were inaccessible, the floor was still accessible for gaming by the PC. Furthermore if it's a "Revolting Cocktail Lounge", it might be a reference to the band "Revolting Cocks" who did a cover of the song Do you think I'm sexy? by Rod Stewart, a frequent Vegas performer. The video for the song also takes place inside what appears to be a vegas cocktail lounge/stripclub. Mictlantecuhtli 05:44, September 5, 2010 (UTC)

any way to get access to the basement after the show that Mr. House gives you?

i noticed a terminal on the back wall, and am curious if you can access it...

Issue with security of stored items in the Presidential Suite?

I've noticed that apparently my followers who stay at the Lucky 38 have taken to being freeloaders. Twice now Boone has taken liquor from one of the Presidential Suite Refrigerators and consumed them. This could become quite problematic down the road if he decides to go raiding my fridge for drinks I'm trying to stockpile for future use. Don't know if this would be a bug or just the game's AI.

I'd try using containers (if there are any) in the coctail lounge, or casino, or even possibly in the penthouse, since your freeloading companions don't go to those areas on their own.Superinsomniac 00:51, November 5, 2010 (UTC)

Going off of what is already said on the page, I activated the terminal in the vault and it said I failed the house always wins quest. This was on the xbox360. - Bot

I think that the picture for the Lucky 38 should be changed. The picture itself is fine, however, I think we should get a picture that show's the building's whole profile, such as the Washington Monument's picture. Is this one okay? (By the way, this photo will be temporary, and will be replaced by a better version later on.) 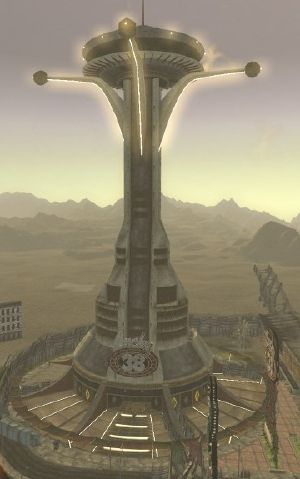 And also on a side note (somewhat irrelevant), how tall is the Lucky 38 in comparison to the Washington Monument? The Monument is 550 feet, and this question's been bugging me for some time. The Jovar 23:10, October 31, 2010 (UTC)

Is C-4 really rare enough to be notable loot? I already removed stuff like Doctor's Bag. See Help:Notable loot for guidelines on what is notable. Miscellaneous weapons and ammo are not notable. JonCollins 01:21, November 2, 2010 (UTC)

"Pretty much everything gets listed as notable loot". Not true at all. There are a lot of FNV pages where that is the case, but they will eventually be cleaned up. See Help:Notable loot. The only weapons that should be included in a notable loot section are uniques. I've only included Plasma Defender here because there are only two of them. C-4 is just not that rare and it restocks at certain merchants. Value also doesn't necessarily mean it's notable. Many fully repaired weapons are worth 1000+ caps. JonCollins 09:42, November 9, 2010 (UTC)

Same problem - any help? I've waited about 72 hours and both Boone and Veronica are not there. They're in the penthouse in lucky 38

The elevator won't let me go to the Cocktail Lounge for some reason.

I chose the Yes Man path if that helps

Executive override does nothing, actually

I've been poking around in the GECK, and it appears to me that the executive override does absolutely nothing of value. It absolutely does not unlock the secret door on the penthouse. If you look at the scripts associated with the executive override, it unlocks a terminal in the Lucky 38 - the one on the Casino level that you need to put the bug on. But it appears that the lock/unlock status of that terminal is not checked for that quest, and the terminal is in a non-working state. So it's possible that there was a longer more complicated quest that had to be cut short because they didn't have time to finish it before the product was done.

The thing that unlocks the terminal in the penthouse is the Lucky 38 VIP Keycard, which is conveniently located in both spots.

So I just reloaded a save from before I had touched any of the terminals or been to Camp Golf, and tried the terminal. You just get a "Lucky 38 Access Point" message, with one option, "Leave". If you go and start the "Executive Override" at the House Resort (Camp Golf) terminal, nothing happens; the terminal remains the same. And the terminal to open the secret door on the Penthouse level stays locked.

Do the red letters on the Lucky 38 sign have any significance? (Revolving changed to Revolting, etc)

I don't know about the "T-O-U-S-W" part, but I do know that the Revolting Cocks is the name of a band.

Why was this location split up into several pages?

Why did someone create a page for every area of this and split it off this page? There is no need for it IMO. A lot of other locations keep everything on the same page. Why is this any different? That's what the layout section is for. Notable loot is always broken up into sections as well for the different areas. Just seems like a lot of unnecessary browsing for the people reading the page to me.--Jimimorrison 22:01, December 1, 2010 (UTC)

There's no rhyme or reason to how people break up locations; it's pretty much if a location gets too big people might split it up. The Tops, for example, is mostly one page but has a sub-page for The Aces. Camp Golf has a separate sub-page for House Resort, which is part of the same location. I can't tell you why the original person split this up, but apparently they felt each location had enough to talk about. For some purposes like using the console to fast-travel, it would be handy if every interior cell had its own page, but that would mean several vaults would end up on like three pages, and so forth. If you feel super-strong about it, merge some or all of the other pages back into this one. Dmunsil 22:28, December 1, 2010 (UTC)

It should be noted that inside the main casino floor their are tables designed to play The casino dice game 'Craps' Was this game cut from the other casinos around new vegas?

I know it's not really helpful in the game but wouldn't it be cool to have a reality show-esque machinima where all the companions try to live in the Lucky 38? Arcade and Veronica can be fighting all the time, Raul's making advances to Lily and Boone hates everyone for one reason or another. Every so often they go out on the Strip an do stuff and the Courier's face or voices is never really shown.Can someone post something like this on Youtube? I'd love to see it. I don't know if this kind of post is "illegal" but tell me and I'll delete it. 24.19.227.186 20:13, February 12, 2011 (UTC)

Can't send followers to the Lucky 38

The same has happened to me. I believe it might have something to do with the quest-path chosen, but I have no idea. None of the files I've played have been House supporters, so maybe you have to support his to get that benefit? No clue. BILLYOCEAN 23:37, May 28, 2011 (UTC)

I've also had the same problem on my latest game. I have DM and HH, but I can't tell what's causing it. I am following pretty much the same quest path that I have before, I don't think it matters really which path, as long as you talk to House and get the presidential suite you should be able to send companions there. 76.85.171.65 06:56, June 25, 2011 (UTC)

I have both DM and HH for the 360, and I am no longer experiencing this issue. Can't confirm for other systems, but the latest patch has seemed to fix this. Any further input would be appreciated. "Golly, but these pants are tight." 11:51, June 30, 2011 (UTC)

Are the references 1 to 6 at the end of the first section meant to represent a nested dialog between several/different characters, and therefore use line breaks?
And what about ref 7? Looks a bit misplaced in its separate line below Notes. Where shall that belong?

I wanted to ask before I go to change the formatting … --

What? "Edit" them "away"? Or applying correct format? Then I still need to know where ref 7 has to be placed. Simply at the end of the tree? --