If there's no info on this enemy, no image, and no references, then how did this page come to existence? I'm not saying that the enemy is fake, per se, more that I don't know exactly how we know this thing is in the game as of yet.

May I also add that upon inspection, this page was created by a user who was recently blocked for vandalism.

Well, an image was added after you posted this. If that's what the page is based off of, I don't see a problem keeping the page up until proven that the image is just a simple ghoul. --Kastera (talk) 12:57, August 29, 2011 (UTC)

We can rename \ redo this page right after the game is released and we know EXACTLY what creature or character this ghoul is. This red ghoul is a part of Lonesome Road, so the page may stay. Master Mold 16:37, August 30, 2011 (UTC)

That wasn't the issue, my issue was that there is no proof that the enemy in the picture is nothing more than a ghoul. Before that picture was added, this page was completely blank. I have no problem with the page being here, it's just that I'm not convinced this is a "Blood man" as of yet.

Non-vanilla textures? You've got to be kidding me. What do you call a red, flayed human without nose and some tufts of hair? A ghoul. 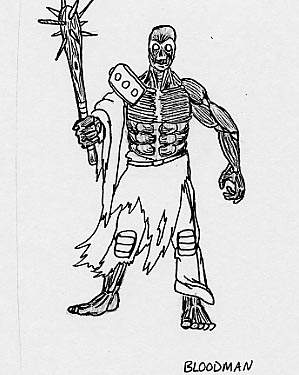 LOOK CLOSER AT THE EYES! it was never a blood man! its a ghoul! look carefully at his eyes and you can see they are dark and small like a ghoul's!

I uploaded a screenshot from the Lonesome Road trailer, looks like the 'Blood Men' were the NCR soldiers.

Errm they wear a bit of legion armour too (shoulder pads). They could be infected scavengers or possibly Ulysses followers?

We know the NCR lost men going through the Divide on some occasions, so it's not impossible that they're NCR soldiers. And scavenging is of the utmost importance in an area like that I'd imagine.

"Say 'ello to my little friend!"

Didn't Johnson Nash say something like: hope a storm from the divide skins him alive or something similar? Maybe these things are people without skin?--81.231.125.88 19:04, September 14, 2011 (UTC) you could be right i mean it doesnt seem like a ghoul would know how to salvage armour and most smart ghouls are non hostile so these are most likely skinned humans--Corporal grif 21:56, September 14, 2011 (UTC) Makes sense, someone should mention that on the page. It's full of speculation that they're ghouls.

Yup. Anyhow they're probably the remnants of the legion and NCR that were sent there. Banding together for survival or the like. =P Wyrmalla 23:57, September 19, 2011 (UTC)

I'm not sure this should be mentioned, it could've been the Courier in the video wearing it since it was when Ulysses was narrating about factions... Fallout: Shades of Grey, coming 2012 22:43, September 14, 2011 (UTC)

The name makes no sense.

Anybody willing to tell me why theyre called Marked Men? What mark do they have? Why not just call them Divide Remnants. Or something something Remnants. I don't see how the word Marked got into this. I know that's their name and we can't change that, but why Marked? --Felix Brehh 20:51, September 21, 2011 (UTC)

Maybe because they got irrevocably marked by the Divide? Like branding? http://images1.wikia.nocookie.net/fallout/images/0/08/Personal_Sig_Image.gif Tagaziel (call!) 20:57, September 21, 2011 (UTC)

That would make sense, but they could have chosen a better word for Marked. Maybe scarred, forgotten, something like that. I like the symbolism in the name, but the word could have been a lot more appealing to the characters. --Felix Brehh 21:10, September 21, 2011 (UTC)

This article speaks of the Courier bringing ED-E to the Divide prior to FNV and Lonesome Road. There are no indications that it was ED-E or a duplicate of him that caused the Divide disaster.

Therefore I suggest we instead use other users' suggestion of it being a special Enclave detonator that caused the disaster.--TD Ghost 15:51, September 25, 2011 (UTC)

It definitely wasn't ED-E that destroyed the divide, because LR ED-E was built by the divide computers after they picked up the original ED-E entering the Mojave in 2281 (game start). I'll change it now if everyone is ok with that. Al bukhari 22:06 (GMT), 31 October, 2011.

Well they aren't in a faction, so they are considered natives or something, Sneering Imperialist would make more sense. --Felix Brehh

No mate, you were right the first time, all the eyebots, including LR ED-E, were created in the divide after picking up Original ED-Es' signal at the start of the game. This is confirmed on the divide page which states that it was a detonator and does not mention ED-E once Al Bukhari 22:09 (GMT), October 31 2011.

In dialogue with ulysses at a certain time during lonesome road, he talks about the marked men. At this time you can ask him "what are they, ghouls?" He says "not exactly" and proceeds to explain that they look like ghouls because their skin has been flayed by the storms at the divide.

If this is the case, why are they said to be a variant of ghouls in this article? I think this should be cleared so as to avoid an appearance of "non-professionalism" Thanks (Nemerian 09:38, October 21, 2011 (UTC))

What's nonprofessional? Marked men can be considered a type of ghoul unique to the Divide. Just like regular ghouls, they thrive near radiation. http://images1.wikia.nocookie.net/fallout/images/0/08/Personal_Sig_Image.gif Tagaziel (call!) 10:18, October 21, 2011 (UTC)