So are there going to be multiple 9-irons cause it would make sense if there is a unique one?

Sorry for the mistake however a driver is still a golf club am I correct? Frantruck October 12 2010

Yes, but this will probably still be called a "9-iron" variant. Well, they'd better at least make it look like a driver. And I hope they make a putter to complete the set! RadRuler 03:23, October 13, 2010 (UTC)

It is, in fact, a driver and it would be nice if Gothemasticator would stop removing references to that from all related pages. Anyone with half a braincell can see that the model in-game is of a driving wood, regardless of the fact that it's considered a unique 9-iron. 97.123.70.232 22:54, December 1, 2010 (UTC)

i got this weapon.

i got it from a fiend known as Driver Nephi in the ruins outside of new vegas a bit south from camp mccarran.

Seems fine to me. I took out half The Tops with it, no sweat. --Kris

I found driver nephi dead before ever encountering him, and his 9 iron wasn't on him when I searched for him on my 360. His head was also exploded so I lost caps on that one quest. Has anyone else had this problem? I can't go back and try to find him before he died so I've lost interest but it upsets me that I can't get all the unique weapons.

It does need 2 strength

The article says it requires 0 strength compared to a normal club's 2 STR but it clearly says 2 STR on it so I changed it. 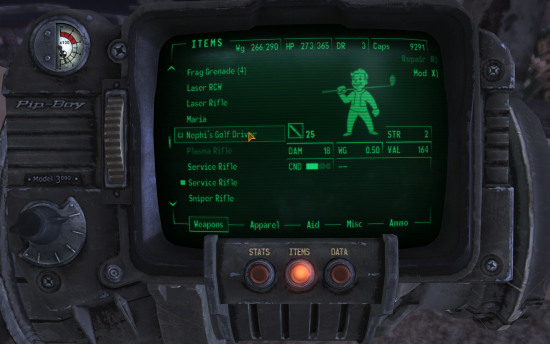