Is New vegas strip a different settlement a part of new vegas or new vegas, normally i wouldn't give a shit but if i have to pay 2000 CAPS to get into the most awesome town in the game i might just get fable III instead

Anyone else hit this problem? I already payed my entry fee to the Strip quite a while ago, and I recently finished "Talent Pool", and now when I try to enter the Strip, it says it's locked and requires a key. I play on the 360, so I can't use console commands or anything. Can someone help me?--With care and happiness, Supermutantslayer450' YOU. LOSE. 05:27, October 23, 2010 (UTC)

I made my way to the Strip via the King. I entered it once to kill McCaffrey, then left to work on some other stuff. So, later on, I'm trying to go back into it, and the game crashes ala Fallout 3. Anybody else having this? DannyShotgun 23:51, October 26, 2010 (UTC)

This is from the same person who made the last post, I visited Bethesdas forums and found a possible fix. Head to the Crimson Caravan Camp and buy the Old Cowboy Hat there, apparantly equipping it removes the blackout problem when entering the strip. Also I found a possible cause, completion of the Debt Collector quest (or part thereof).

I was in the Strip at night and it was completely empty! I walked around and I could only find a few hookers, NCR troopers and like 4 citizens. What the hell?! I thought it was supposed to be jumping! CHIEF Talk to me 15:58, October 24, 2010 (UTC)

Howcome theres no NCR troops in the Casinos gambling or having fun. Every few seconds in the Tops I hear a group people off in the disance go, "OOOHHHHHHHHH!!!!!!!" Like someone just hit the jackpot or got 21. Then when I walk around the casino, I can never find them.

The strip should have more people and from different factions. I think itd be cool if ceasers legion was allowed on the strip. (even though ceaser would be mad if he caught his troops drinking.) Also the kings, brotherhood, great kans, powder gangers all getting along only on the strip. It would feel alot more tense even if they all where just standing there eyeballing eachother.Robandbig 18:40, October 9, 2011 (UTC)

has anyone had the problem of a random, wild brahmin spawning after you enter the side of the strip with the tops? It was just running from one gate to another, when i capped it. Wasteland Jesus 21:11, October 26, 2010 (UTC)

I had it too. The next time i visited the strip it was empty. Perhaps the Brahmin ate everyone on the strip except for some hookers and NCR soldiers. (Just a joke. Still trying to figure out where everyone has gone) Is there a solution to get the people back to the strip?

This is a scripted event. A generic NCR trooper will be chasing it. When the brahmin hits the other gate, it disables instead of entering the gate. KaisarDragon 01:39, December 25, 2010 (UTC)

, this is scripted? It happens to me more than once sometimes, and in other games won't happen whatsoever. --NuclearAnamoly 01:40, September 20, 2011 (UTC)

I had this happen, except there was a nightkin chasing the brahmin instead of an NCR trooper. It killed the brahmin and attacked everyone else until I killed it. I think it's probably related to the nightkin bug. Happened on Xbox. CalClayton 23:19, 1 June 2012 (UTC)

I know it's on the page, I just wanna know if anyone has found a way to fix it. I skipped the things that go boom quest the first time around so this didn't happen. Can you take the monorail and get in without a black screen?

Apparently wearing an "Old Cowboy Hat" will allow you to enter the strip without problems, these can be bought from various merchants, if you can't find one however, Blake in Crimson Caravan Company has been reported to sell them often if not all the time. -iPeer(talk) 20:21, November 2, 2010 (UTC)

Why the Old Cowboy Hat? Is the game fixed to where that's the only hat you're allowed to wear on the strip or something? Also, I haven't made it to the strip yet, so another question: does this glitch affect everyone? Like, for example, the Weathered 10MM Pistol weapons mod glitch? Or is this just a luck of the draw type thing like most of the glitches in this game?

I hit this problem, too (PS3), and from my experience/experimentation along with what I've read on this and other posts/forums, this sounds directly related to the Debt Collector quest. The quest relies upon you returning McCaffery's hat as proof of quest completion. Usually when you remove a dead NPC equipped apparel, it is also visually removed from the NPC. In my case, removal of the hat from McCaffery's inventory DID NOT remove the rendered hat from his head (FYI: he was decapitated in the fight, so that might also contribute to the issue). My guess is that the presence of the to-be-rendered hat in the absence of an analogous piece of equipped apparel triggers a bug, resulting in the freeze. I'm also guessing that having at least one character in the environment with an equipped "Old Cowboy Hat" (which is what his hat renders as, even though it is labeled as "Caleb McCaffery's hat" in inventories) gets you past the bugged logic. --6hMinutes 06:31, November 22, 2010 (UTC)

Take out robots without being vilified

I was able to take out the robots by just shooting them in the head as I stood next to them (fairly easy actually). I'm still 'neutral' with the Strip and not vilified at all. Can I change this in the article? --The Bart 07:22, November 24, 2010 (UTC)

Gates and fences on The Strip

I'd take a guess and say to eliminate CPU strain. On the PC, you can clip through the gates and all the buildings and doors to various casinos are intact. The gates only affect the various NPCs loading. Also, before update 3, each section used the same securitrons. You could kill them all in the Vault 21 area, leave, and find that they were dead in all three areas. The strip is heavy. Having all three areas as one would cause a lot more crashes than it does already. KaisarDragon 01:43, December 25, 2010 (UTC)

Perhaps its worth to note that in a previous build of the game the wall around the strip (at least in the IGN preview) was identical in architecture to the McCarran southern walls (the one you looks at from Cassidy's Caravan). Still, I hate to know that stuff was different, makes me feel as if the current product is but a shadow of what it once was meant to be. --Radnus 05:03, May 26, 2011 (UTC)

This one is a toss up. If you use Science to trick the gate guard into letting you pass all is fine and well until you talk to a gate guard. There really is no reason to talk to the guards, but doing so will reopen the strip check. Only now you no longer have the science option. You'll be forced to present the fake passport or submit to the credit check. KaisarDragon 01:49, December 25, 2010 (UTC)

Early previews on the official website introducing the Strip indicated that the Legion controlled it. Jarwulf 01:50, January 4, 2011 (UTC)

"Sometimes a nightkin will randomly appear and start slaughtering everyone but the player, this can hamper quest progress as the nightkin can kill people needed for quests, this can be fixed by simply reloading the save file."

Under bugs. What is that? I've never heard such a thing. The are only two nightkin I can think of that would do this: Tabitha's army if you repaired Rhonda and that lone crazy one from the tumbleweed ranch. Either way, it appearing in the strip like that was either a major glitch on their part or fake. Confirm unverified? KaisarDragon 08:21, December 30, 2010 (UTC)

Safe to come in?

Wasn't sure if I should add a bugs section. If you punch the gate to new vegas strip with a power fist blood will come out. Oh, and I noticed another bug, it seems like if the securitrons become hostile the ones near the train station won't be able to go down the stairs --Silverfang22 07:03, March 22, 2011 (UTC)

Odd Occurances on the Strip

During one playthrough I heard a commotion off to my left and turned to see a bunch of drunken soldiers, stripped down to their skivvies partying in the fountain of the Ultra Luxe Casino. It was hilarious watching the NCR MP's and Securitrons trying to break up the drunken scene with onlookers claps and egging the 'ladies of the fountain' on ! 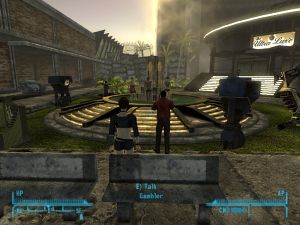 Party on the Strip !! 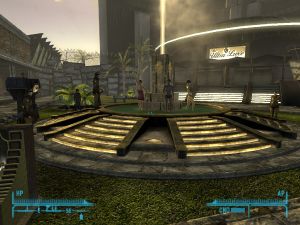 Soldiers letting off some 'Steam' !

Oh and in case anyone was wondering, no Wasteland Wanderer perk was not active on this playthrough. Kronnus 06:44, March 23, 2011 (UTC)

I have also seen a random brahmin running away from the tops to the other gate, then disappearing.Icommandoxx 18:44, March 23, 2011 (UTC)icommandoxx

Aye, Icommandoxx, this was mentioned above under subject "Brahmin" as well. I have seen that 'scripted event' as posted also. Kronnus 20:18, March 23, 2011 (UTC)

Has anyone else seen NCR Troopers wearing Desperado Cowboy Hats on the strip?

This may be related to the "PS3 bug" by DannyShotgun.

I completed the Debt Collector quest and went into Vegas. It loaded fine, but when I try to do something other than walking or talking the game crashes. For example: quick switching weapons, activating Pip-Boy, and unholstering a gun.