Seems I have to expand it :)

They pay the prisoners? Or only when they have reached the end of their sentences?

Firstly, I've never heard them called "Powder Gangs." They always refer to themselves as "Powder Gangers."

Secondly, my understanding is that they were prisoners that escaped from NCRCF (New California Republic Correctional Facility.) They were never getting paid for their work; they just overthrew the prison and now possess most of the dynamite that the NCR used for mining and laying railroads, hence the name "Powder Gangers." ProfessorApoc 17:24, October 22, 2010 (UTC)

Actualy they were getting paid initially,however support from the rest of the NCR was cut off making them unable to continue paying them.Thats what pushed them over the edge,and started the riot.Ragedaoneanlonely 13:28, October 29, 2010 (UTC)

Can anyone confirm that after you kill so many Powder Gangers that they send a man after you to ask for a truce, diplomatic? I was told this happens at some point if you kill enough of them. --Syrant 02:53, November 15, 2010 (UTC)

I just had a Powder Ganger ambush me in the Lucky 38 Presidential suite offering the truce while I was sleeping.

He says "while you're not a friend, you've helped us out some all the same" and then offers a truce. The only interaction I've had with the Powder Gangers was killing Joe Cobb at Goodsprings, making sure I only ended up being Shunned by them so I could visit the NCRCF later and do their quest (I should also note that I haven't even visited them yet, so the "helped us out some" is rather strange). He was the only Powder Ganger I've killed in this playthrough.

The Powder Gangers seem to act inconsistantly to their reputation.

With one character, I am "Vilified," and they are hostile, but I can make them neutral by wearing a uniform.

With another character, I was "Accepted," but the Gangers were always hostile, uniform or no.

--- I have been vilified for sometime now and after a recent trip back past Goodsprings I ran across a few Gangers that would speak to me as NPC in tones suggesting I watch my back and sleep with one eye open, but they don't attack me until provoked... Worse yet I attack them and while the ones on the current cell get upset the ones further up the road don't... Anyone else same oddity? --Ndmorespd 03:19, February 6, 2011 (UTC)

So i got [Liked] From the powder gangers, andi can only wonder, What is the real benefit to having them like you in general? Nosferus 05:10, November 26, 2010 (UTC)

I delayed the quest involving them in goodsprings and did the mainquest, after nipton i did the "booted" quest and later i went to the ncrcf to talk with meyers about the sheriff job in primm and did the quests for eddie. now they give me explosives and crafting material every few days. not much but its enough until i can decide what to do with them. --Ra1n 01:17, December 27, 2010 (UTC)

Far to many prisoners?

Is it only me, but if you count the PG's in the different locations in-game. Doesn't that add up to far greater numbers than who could fit into those two small barracks in the NCRCF? 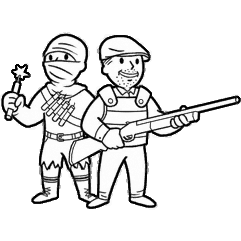 How Come The Powder gangers Reputation Image Shows A PG (on the left)With A Kind Of Ninja Suit And The 1 On The Right With A Hunting shotgun,Cap And Stubble?

But There Is NO Powder Ganger Outfit That Resembles A Ninja Suit. And There Is No Cap Like The One In The Image, No Powder Ganger Has A Hunting Shotgun ( Not In Primm, NCR Correctional Facility Or Vault 19 )And There Is No Way To Have Stubble As Facial Hair.--Ullyses = Epic 12:05, July 26, 2011 (UTC)

He's making sense! Quick, execute him! Honestly though, I have no idea. Yet another continuity issue obsidian overlooked?

Neither, the ninja mask might've been planned to be used in the game as some sort of re-textured Legion recruit helmet. As for the cap and stubble. Well, it might've just been used to make them look like criminals from the 40's.

Yeh I'm kinda confused about losing karma when i steal from the powder gangers. I'm trying to be a good guy but i lose karma if i steal from them. However if I brutally kill them, strip them clean, and then leave them for the coyotes I get good karma. Whats up with that?