I second that "Huh?". It's called FOOL by people, not by the devs. Fallout Online, FOOL is an easy acronym that makes a regular word, unlike FO. Bah.

It should be noted that on the Interplay website under Careers, there is a listing for Technical Director and under requirements "•Previous MMORPG experience.•Familiarity with the Fallout® universe. " XxVlurpxX

Possibly a refrence to Vault 13?

Like a version of WOW that isn't a WASTE of time :P lol jk.

THIS WILL BE EPIC!!! by wasteland survivor

Is it true? I have mixed feelings.

If this is true it "may" not be a good thing. Fallout was a game that helped get me away from the MMORPGs. I don't see VATS working in a MMO PVP environment and if they lose the vats fallout isn't really fallout anymore. Bethesda did a great job on FO3 but they had experience with making open ended RPGs. Also I wouldn't want to see it done like wow Id rather see it so first person was still the best view. Everything would have to be different. Currently you can miss a shot in first person while pointed directly at them. This wouldn't work in online pvp. If they gave you a ability bar like in wow with all your attacks on it would be retarded. What attacks would they put on it? Kick melee shoot gun? I suppose you could make opposite factions based on things like raider mutants vault people ect. And they would probably try to add magic which would be retarded. I can see how they would do diff classes. Doctor thief explosives ect. But that would ruin the ability to build your character the way you want... dividing your skills. All in all I think this may ruin the tradition of fallout. It sounds great at first but really they would have to change to much. Fallout games are kept semi realistic. Not to mention how much they would probably screw the story line. What I would prefer to see is a version of fallout that has a higher lvl cap and keep releasing expansions like they are currently doing but with an only co-op play. Where you team up with someone and run around the wasteland. Multi player but not mmo. What do you guys think? Good or bad? Not to mention an mmo might distract them enough that they stop releasing fallout games. --CrazySuni 07:11, January 8, 2010 (UTC)

Why does the game have to be exactly like World of Warcraft? This is a video game, it's a pretty flexible field. SilencedSouls 22:09, November 18, 2011 (UTC)

Was there a beta?

There are some screenshots that are on the page now, and I was wondering, was there a beta or something? - 16807 Compunctious Transgression

There is apparently a beta coming out fairly soon that you an sign up for on the game's site.

Anybody else having the same opinion?

I just received an email from someone who is working on this project and he is abhorred that you've even compared it to Borderlands. :P Saccade 19:35, July 29, 2010 (UTC)

Abhorred, why? From what I saw of borderlands many of the asthetics were taken from fallout 3, in other words they copied the atmosphere and feel of fallout. Imitation is the sincerist form of flattery.

I Love the concept art

The concept art is so interesting. its not quite Fallout, but still pertains to certain Fallout characteristcs Post-apocalyptic-guy 00:21, March 6, 2010 (UTC)

is this even going to be canon? you would have independent players messing around, a certain amount of lenincy and changes to make the fans happy, and to top it off the game might not even be legal, so is any of it going to be canon, or are we just going to have to wait and see? Katikar 10:12, June 26, 2010 (UTC)

At this stage, no-one can say for sure - if I had a guess then I'd assume it'll be a similar case to Star Wars Galaxies (another MMO) in which the setting, NPCs, and events are all considered canon, but not specifically the player-created characters themselves. In canon, any events or missions within the game may just be referred to as having been brought about by "a group of Wastelanders" or something non-specific. --BADavid 21:47, July 3, 2010 (UTC)

Judging by the looks of the armor...

Take a look at this: Fallout Online 2238 Download Link

This is the download link for a Fallout Online client / installer [dur]. I think that it's the latest incarnation of an old mod for Fallout 2 that didn't really work. Whenever I play Fallout 3 on Steam it always pops up giving me the product/CD key, telling me that I may need the key to play multiplayer online. I've never tried to do it, so Idk if it works or if Steam have just f*cked up (surprise surprise)...

We'd tried a few (and messed around with a few) mods and hacks to see if we could get Fallout working online for some hardcore multiplayer deathclawing of innocent civilians - figured it would be like Arcanum's multiplayer - as Fallout 1 & 2 are probably better suited to proper online and multiplayer stuff than the FPS shooter that Fallout 3 (aka Elder Scrolls: Fallout) became. How would VATS work..? Needless to say, none of our attempts to get Fallout to play like that worked, but it seems as if these guys have managed it.

It seems that they're updating it fairly regularly and that it should be going in the direction of how Van Buren was meant to be, using 2D3 and all that malarky. At least according to Himmler, who found this particular mod after the other Fallout Online mods all failed to deliver the goods (most didn't work the same way that ES IV: Oblivion Online mods failed).

The main problem with FOnline 2238 is that there are so few multiplayer quests right now. It mostly consists of "Single-player in a Multi-player world" quests; the only multi-player interaction comes in the form of robbing, killing and/or insulting the other players who are online at the time (relatively few atm...). What it needs is a few people to help out, concoct and script a few multiplayer quests.

I'm not sure if FOnline 2238 is already on this wiki. When I saw this addition, this was the first thing I thought of.

It's a good thing that Fallout Online is not being made by Bethesda. (Imho)

Some pictures, from Himmler's review/posts: 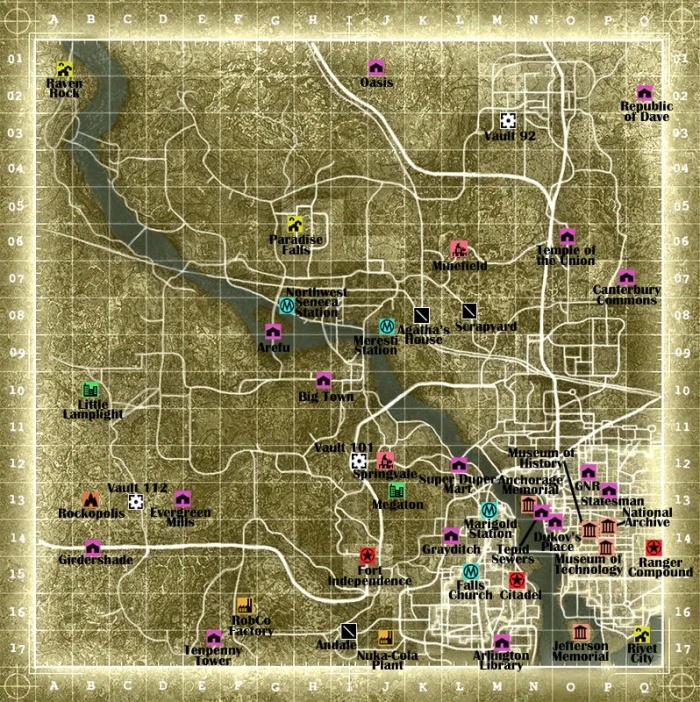 APB: All Points Bulletin didn't last three months before shutting down. Considering Interplay's "reputation" with administrating its business, the possibility of legal disputes over the Fallout franchise and other factors like the real possibility it might completely bomb with the reviewers like Final Fantasy XIV...

Anyway, is there any interviews(with ex-black isle folks), coverage or other material covering these points? Fallout: Online always sounded like a carwreck waiting to happen to me.

"Facts" hilarious! APB had a $50 million budget, crashed and burned got bought for £1,5 million and is now free to play(1-Crappy game people don't pay to play 2-????? 3-Profit?), though still in beta with issues like "crashes every 2 hours". I'm sure Interplay, with its starling reputation under Caen management, is going to do way better with a $30 million budget and constant legal actions by Bethesda! Dr. Lobotomy

Yes. Really. FOOL will only be for the PC like most MMORPGs like World of Warcraft and Star Wars Galaxies. CHIEF Talk to me 11:08, December 7, 2010 (UTC)

Can someone say Wasteland box cover art for concept: A day to live a life on.

On map size they will do every state all fifty or only their capitals and as a treat to Fallout fans Las Vegas will be turned into Wastelands map.

I was told Interplay is bankrupt. Fallout MMO is NOT happening.

they have 35 million in funding.. far from bankrupt.

If Fallout MMO or the online play does come out then the maps are going to have to be huge. they will have to bee alot bigger than some of the prvious games, like in fallout 3 you could walk the map extremely quickly. None the less i think its going to be a awsome addition to fallout.

It might be a little early to be naming off locations when there is a possibility the game won't even be made, but there are two pieces of concept art that look to be part of the same building.

Notice the giant tower in the middle of the mansion/compound 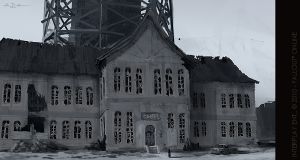 Then here, notice the front of both mansions/compounds are identical, and you can see the tower behind it.

Should Tesla Tower be put in as a location?