Can someone confirm for me that this gun is ever in stock at the Silver Rush? I've waited about four months game time and it has yet to be there.

Yes I can ;), I bought my first one in my inventory at the Silver Rush. Otherwise sorry I have the french version but the content doesn't change, text only. It's call " Pistolet à impulsion " in French. 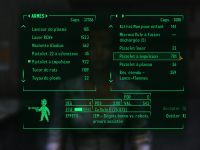 Another pulse gun in Silver Rush

By cons she never sells Plasma Caster then there is one beside her, which seems to be the only of the game, not found elsewhere. Itachou [~talk~] 00:36, November 5, 2010 (UTC)

In my Canadian PS3 version of the game, at 100 energy weapon skill, level 30. Silver run NEVER EVER sells pulse gun

waited 30 days or so, at level 30 still no pulse gun in silver rush.

Maybe you have unpatched version of the game. Also the GECK shows that pulse gun have a spawnning change of 0. It's an unique weapons obtained by a long quest or 100 lock picking skills. There might be a bug in unpatched version that allows u to get it in other places but it's not so anymore.

Also different versions of this game in different countries DOES have different contents. For exmaple the germany version's [Bloddy Mess] doesn't actually have blood/enemy exploding, and Japanese version of fallout 3 doesn't allow you to blow up megaton.

Also if you look at edit history, there are multiple people raising question about the legitity of pulse gun in silver rush and you are the only one defending it.

I will defend the legitity. In my NON-PATCHED American version I bought one. It never restocked but the Silver Rush had one.--Christian Broach 22:29, April 28, 2011 (UTC)

After testing in my new game, he is right, beginning a new game with the patches, it's now no longer possible to buy the Pulse Gun at the Silver Rush, hehe shit, I like this weapon ! Itachou [~talk~] 02:31, November 12, 2010 (UTC)

Despite the article aying that theres only one of this weapon in the game there is 4,one in the vault 34 armoury,one in the sewers,one sold by the Van Graffs at Silver Rush,and one used by a random fiend.Someone should edit the article

I've not had the game patched and found one on a random fiend near the New Vegas Steel area as far as I remember. Just adding this to confirm it can be found that way. It definitely wasn't bought I know that, and am sure it was a fiend that had it. (haven't had it patched because I've yet to have any big game altering bugs, and have played about 70+ hours and finished the main story. Just doing hardcore run now.)

The Pulse Gun is found on a Fiend north of Win's Hideout.

Yes, I tested it out. I found one on a random fiend in a broken house north of Win's Hideout.

I also found a Pulse gun on a random fiend to the far north west, but not in the mountains. A group of three fiends was hiding behind a billboard, ready to ambush any travelers, and I fired upon them, but not before one of them used a Pulse gun. I saw the beam streak by my head several times, and thought to myself "What the hell was that?", as it was not a red laser beam, nor a green plasma bolt. I looted the corpses, and sure enough, one of them had the Pulse gun on him. However, this was not an updated game, this was straight out of the box. If you connect to the net and attempt to play the game, you will be prompted to download the latest patch, which will fix several bugs in the game, such as the availability of the Pulse gun, the Vikki and Vance infinite money glitch, etc.

You are wrong about the damage of this gun. Securitrons Protectrons, mr handy and turrets will die in 1 shot. power armor sentry bots will die in 2 shots like you said. some rare robots can withstand 3 shots. This is true in very hard difficulty. 137.186.66.8

Just would like to add that the "Hardened" Robots that defend the crashed vertibird definitely do NOT go down with one shot...

Exactly, so the weapon does not kill all enemies (robot or otherwise) in one hit, on any difficulty except maybe very easy. Mictlantecuhtli 06:01, December 2, 2010 (UTC)

Requesting this page to be locked

There's only ONE pulse gun

If you call looking for a weapon on a video game a waste of time then you must really not have life outside of Fallout. Skateordie1213 [~talk~]

The old version's pulse gun had a small spawning chance, therefore energy weapon sellers occationally have it. Containers with random energy weapons might have it. Fiend is the only enemy with random weapons with include energy weapon, therefore they can have it too. Now that the game is fixed, there is only ONE of this UNIQUE weapons 137.186.66.8

Absolutely true, yes, the patch has fixed the Pulse gun availibility problem. The problem was most likely caused by a programmer who merely forgot to add a few more strings of code, or something techy. The patch fixes that. To download the patch, merely connect to the internet, and attempt to play the game. You will be prompted to download the latest patch. To avoid the patch, allowing exploitation of several beneficial glitches, merely do not connect to the internet while playing Fallout: New Vegas. - Andrew Hand

Any way to have Pulse + complete related quest?

As I'm sure you know, the Pulse Gun is needed to complete a certain quest with (I think) the Brotherhood of Steel. But, I'm interested in being able to keep my Pulse Gun AND complete the quest. Is there any way to go about doing this?

It's Veronica's companion quest, and as I recall you don't give up the gun at the end. If you're worried about losing it, there are two other options for rare tech that you can find to finish the quest instead. Just don't choose to find the Pulse Gun when given the choice. BunnyCommando 11:19, June 1, 2011 (UTC)

I opted to give McNamarra the experiment data from Vault 22 but my quest log still updated with info on having the Pulse Gun even though I didn't choose that option. I completed the quest by turning in the research data but my Pulse Gun still disappeared from my equipment :/ So, when completing doing Veronica's quest, you really should keep the pulse gun somewhere safe.

I've noticed that picking up the gun for veronicas quest occsionally doesnt update the quest. I ran through vault 34 got the pulse gun and all american and it still says to obtain the pulse gun... any advice?