The people love Ruzka! Everybody's talking about him. We've cornered the market in unique Yao Guai... Bwahahahaha! Nitpicker of the Wastes 20:51, 24 June 2009 (UTC)

Ruzka the Breakfast Cereal, Ruzka the Doll, Ruzka the Coloring Book, Ruzka the Sitcom (check your local listings), even Ruzka da Flamethrower! The kids love dis one. Nitpicker of the Wastes 20:56, 24 June 2009 (UTC) 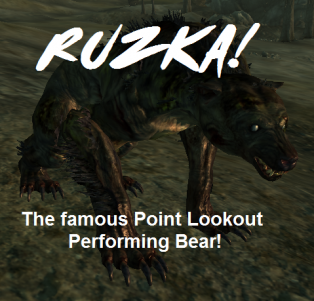 i cant find him where is he?

Are we sure that this is the Ruzko? If it is, does this mean that yao guai are able to live hundreds of years just like ghouls?--Moltenfungus 01:00, 25 June 2009 (UTC)

It could be. Radiation has allowed ghouls and super mutants (along with a dash of FEV) to live for exceedingly long periods of time. And, where else would a Yao Guai get such a huge ball? Only if it had sentimental value would he bring it along, as if he's known it for years. Nitpicker of the Wastes 13:40, 25 June 2009 (UTC)
From a retro-futuristic fifties kinball team apparel =) -Psiweapon

I removed the map pic. It's bad enough someone posted a picture of the local map location instead of the world map, but the only point of reference in virtually cut off in th pic, meaning the only reference we have to it's lcoation is relative to itself. --DragonJTSLeave me a message 15:37, 27 June 2009 (UTC)

Such a shame. Although, if you're willing to contribute a World Map picture, it would be greatly appreciated. Nitpicker of the Wastes 15:41, 27 June 2009 (UTC)

The image of the map

Guys, in fact i've posted the map only for other players to locate the cave. I have no time and abilities to start a full-featured world map as Fallout 3's main world one. I see that many people can't find the cave, and i'm even not talking about the Ruzka itself - there is still no reference or base id of of this character somebody could ever provide! Before many of my tries of finding Ruzka's cave i really didn't believe he actually exists!

If somebody will make a full featured Point Lookout map, or if someone is having troubles finding the cave, this may be helpful.

Yes, but the lack of easily seen landmarks, both ingame and on the map, make it hard to find. If you use the Point Lookout map on the Point Lookout page, and just paint a circle over the spot or something, it should be good. Use the one on the Toy Knife page as an example. Nitpicker of the Wastes 18:58, 27 June 2009 (UTC)

I actually meant a pic of the location on the world map in the pipboy, as nowseen on the page. Since that doesn't even have the name of the door shown, it doesn't offer any clue as to it's location. --DragonJTSLeave me a message 19:07, 27 June 2009 (UTC)

That's what we needed. You go to that spot, you'll be attacked by the only Swamp Guai. Unless the swampfolk git to him first. Nitpicker of the Wastes 19:10, 27 June 2009 (UTC)

Were you harmed by Ruzka?

Are you unable to slaugter towns, kill raiders, scour the wastes for salvage and are you unable to earn caps? Well then let me help you sue Nitpicker of the Wastes for your pain and suffering!--Atlas Lied! 08:48, 2 July 2009 (UTC)

Due west of the Jet Crash Site, just off the map. Now getting maimed is easier than ever! ~burnscar

is it just me or does Ruzka have a greenish coloration, like the murks? - Imanuke, june 16th

I showed up at the lair and bear just keeled over without any reason.. has anyone else experienced this?

Holy crap that bear does tricks!

I was playing with ruzka and gave him his ball and he bounced it away from me. so i threw it at him again and he shot it out. it was awesome! has anyone else experienced this? if so can we add this to the articleOhno21212 12:31, June 12, 2010 (UTC)