Aye Matey. Why would the developers include Samurai Armor? Because the Aliens abducted one. Looking back, my response actually answers both questions.--RedTracer7 23:44, 14 July 2009 (UTC) 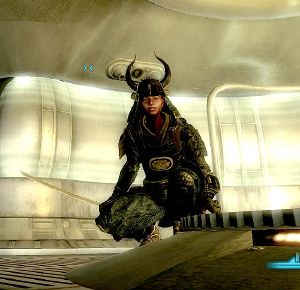 I hope there's a sword to go with it. User:Shadowrunner56

Why not? I've always wanted to be a samurai in the post-apocalyptic wasteland of Washington D.C. I'm guessing there will also be a Katana, and the devs might even make the armor similar to Blades armor as a reference to Oblivion. --Clean Up 00:18, 15 July 2009 (UTC)

Is anyone else picturing a bunch of developers hanging around, saying "hm....now what?" and some guy, who's watching The Last Samurai somewhere, runs in and says"Guys! I JUST HAD THE MOST AWESOME IDEA- SAMURAI!!" (developer 1): "Why not. Okay, samurai it is. Lunchtime."

So what about that suit of samurai armor at the top of one of the Satcom Arrays? You couldn't pick it up or equip it, but it was there.

Speaking of the blades, anyone here ever look at the helmets some super mutant brutes wear??

^I was talking about the helmets used by some Super Mutant Brutes. They look a lot like Oblivion Iron Helmets.--Penumbra 02:36, September 10, 2009 (UTC)

Have anyone checked which other headgears the samurai helmet is compatible with? (using stealsuit glitch)

I use it with many headgears and haven't experienced any problems so far Kalalokki 18:00, September 5, 2009 (UTC)

So you are telling me 15th century(that is a guess) samurai armor can stop a 5.56mm bullet or a superheated Laser? I guarantee it is a power armor variant,or at least I hope it is. So, this seems strange to you, but the fact that the PC, or anyone else for that matter, can withstand multiple gunshot wounds or even direct missile or grenade blasts to vital areas and survive, often without serious injury, isn't? Hmm....Blutteufel 05:13, 23 July 2009 (UTC)

I was just coming here to point that out, you have leather and merc armor that still provides at least some protection so samurai armor isn't that crazy. Considering what the armor is often made of it probably be repaired with metal armor. (if anything) --LordVukodlak 03:11, 1 August 2009 (UTC)

Actually, the Resource Wars were over by the time of the Great War. Check the timeline. Resource Wars ended in January, Great War started October. And ended, but that's beside the point. I think Wolf means the Euro-Middle Eastern conflicts. Nitty 03:13, 1 August 2009 (UTC)

Actually you should check the timeline again. The Resource Wars didn't end until the Great War. Or just look up The Resource Wars article. Operation Anchorage ended in January, not the resource wars. They already did a simulation DLC, if you wanted to fight in the Resource Wars that have to be a completely different game.--LordVukodlak 04:31, 1 August 2009 (UTC)

The defeat of the Chinese in Anchorage, and subsequent loses in the Yangtze Campaign, symbolized the end of the Chinese threat, turning it from a war into a clean up operation. There was no war to fight, the Chinese had lost. The Great War was a last ditch kamikaze counterattack by surviving Chinese cells. They weren't fighting over resources anymore, they just tried to kill as many Americans as possible. The Resource Wars were over. Nitty 04:39, 1 August 2009 (UTC)

it seems to me your 200 year old cloth jumpsuit can stop a bullet with only a tin can strapped to you shoulder. and a tire strapped across your chest canhelp you withstand a small nuclear explosion. and heres the epic one a blunks jumpsuit covered in metal can make you more stealthy. its an rpg it doesnt have to make sense buddy 68.42.146.135 21:03, 23 July 2009 (UTC)

If you are wearing NO clothes on very hard you can still withstand a direct missile blast... I'm assuming samurai armor will give you better protection than none at all. PhayzeShift 17:11, 24 July 2009 (UTC)

I just read an interview that says the "Samuari Armo"r will be in it along with the "Gemeni Era Space Suit". But! What us the new weapon? Maybe a Katana? Cause is ift is,......one word.....FINALY!

I'm guessing so too (check the top topic). I doubt a Katana could do much (unless the Aliens "upgraded" it or something), but it'd still be great to have.

Ugh...Can you imagine how awful it would look if they kept that same clubbing animation so you hacked at people with the katana like one would with a baseball bat? Blutteufel 05:02, 23 July 2009 (UTC)

i'm not sure if this is a glitch or if it is intended ,but my armor has blood on it ,obisuly my blood ,the thing is ,it doesnt go away ,as far as i know the blood always goes away ,but i've been playing a long time and the blood doesnt dissapear ,how wierd:/ Nyoche 18:23, 4 August 2009 (UTC)

it's not a complaint ,it goes away if you un-equip it but i just commented to see if any of you guys have the same and if you do it rocks ,blodd that doesnt go away? awesomeNyoche 18:41, 5 August 2009 (UTC)

Getting the Samurai Armor and Helmet Without Killing Toshiro

I reverse pick-pocketed Toshiro early on and gave him the Tesla Helmet and Tesla Armor. I don't know if the timing matters, but when he was standing around the alien corpses in the living quarters (looking even more badass in his new armor), I dropped a cryo-mine in his pants (while hidden, obviously). While he was on the ground trying to thaw, I "pick-pocketed" the samurai helmet and the samurai armor and didn't get caught. When he got up he had taken minimal damage and he was still an ally. Still a pain, but seems easier than the current methods listed. Now if there was only an easy way to get Paulson's gun. 72.208.217.118 00:39, 9 August 2009 (UTC)JF

The pipboy icon clearly show the emblem as Tokugawa (Wiht the three spades). Maybe it is the extra details make it looks like an Oda?

Will the equipment effect stacking exploit work with Samurai Armor? It seems like if you can stack melee damage over and over your follower should be really dominate with his melee weapon.-Jack Atlas Fountaine

I'm not really sure because on the exploit page it says you can stack the effects of the Luck Shades and Poplar's Hood and I'm fairly certain there are only one of each of those......p.s I'm not really sure how to sign my posts- Jack Atlas Fountaine

Actually you can only stack the effects of headgear with use of the CSA, i suggest you go there to learn more. p.s you need to put down four of ~ to sign your posts Fall-in 00:29, October 12, 2009 (UTC)

I have a feeling this would be brutal.

Anon-posted strategy removed from page. Seemed rude to just delete it, cos of all the typin' they done.

An easier way of obtaining the Samurai armor and Samurai Helmet(And possibly also the Samurai's Sword, provided you've handed it over to him) for the good Karma player(or if you're having trouble pick pocketing it off of him once you've reverse pick-pocketed a better set of armor onto him) is to take your Gauss rifle (Fallout 3)(provided you've brought it on-board Mothership Zeta), and then put all of your Microfusion cells except 1 into a container so that you only have 1, which is inside the Gauss Rifle. Its a good idea to save here, in case something goes wrong. Take your Gauss Rifle and shoot Toshiro Kago in the chest so that it knocks him down(If you didn't place all but 1 of your MF Cells in a container before-hand, you will now begin the reloading animation, which will take too much time and Toshiro will get back up). While he is down, take the armor and helmet off his body and run upstairs and as far as you can go without leaving the area(It is possible that he does not turn hostile at all, but this is a matter of precaution). Once you return to the area he will be non-hostile and you will face no Karma penalties for shooting him.