Wouldn't it be prudent to include what she sells if she's left alive? I am well beyond this point in my game, and she died when a car exploded. Mictlantecuhtli 11:26, August 14, 2010 (UTC)

I met Sydney in a metro station (Anacostia Crossing Station) and gave her her father's note to get the Sydney's 10mm Ultra SMG. Then she immediately ran into some enemies and was killed by them. When I searched her body I got another 10mm Ultra SMG!!! 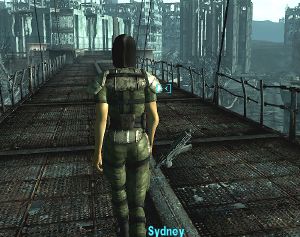 Sydney's strange gun
If you give Sydney her father's note right after you meet Abraham Washington for your rewards, get the SMG from her, and then follow her out of Rivet City, you'll notice she is still carrying the SMG on her hip -- but at a very odd angle. Wunengzi 15:00, November 29, 2010 (UTC)

Does she ever sleep/heal in her sleep?

Sindey is still alive in my game and is in Underworld right now. But she's crippled to the max. Both her legs and arms are crippled, her Torso is nearly crippled and her head isn't in good shape either. Of course she's also very low on health and it's just annoying to see her trying to "walk" around when she's so crippled up.

Nope, she will stay crippled forever, unless...... you pickpocket her and give her a stimpck, hurt her until she has low health, she will may use the stimpak, but she will be hostile, so get out of underworld for a few days then come back and she MAY be better. Sparky talk 15:21, August 29, 2010 (UTC)

Skipped Sydney in Stealing Independence, ever see her again?

I entered the Archives from the lower entrance, and went straight into the basement without ever meeting Sydney. Completed the mission, and on the way out, went through the rest of the upper level and triggered the defend quest, but with no Sydney. Will I ever see her in the game?

If you do, she'll be trying to kill you. It doesn't always happen, but she might show up in a random encounter accompanied by a minigun-wielding friend (Emaline) and accuse you of stealing from her, and then open fire. See "Sydney Random Encounter" in Archive #1. Wunengzi 14:26, November 29, 2010 (UTC)

She doesn't just get stuck on metro cars if you're playing on the PC. After completing the quest with her -- actually about a week after -- I ran into her just standing in the entrance hall of Anacostia Crossing Station, on the Rivet City side. When I talked with her, she began walking again. She made it to the Museum of History all right, since nothing down there was alive but us, but when she went through the doors into the Museum lobby she paused again after taking a few steps, and had to be nudged before she walked through the doors into Underground. Wunengzi 14:20, November 29, 2010 (UTC)

Has anyone else noticed that when you give her he tape from her father and she says "Oh my god, thats his voice..... it's really him." that she kind of sounds like Moira Brown.

Because i hadn't finish the Stealing Independence quest, and I wanted to do the Sydney's 10mm "Ultra" SMG glitch.So it would really help if someone could help me to get Sydney back to Capital Wasteland!

Finished "Stealing independence" fine - joined up with Sydney - found all the stuff and brought it back to Rivet city. Then I did "Reilly's Rangers" and got the holotape. But I can't find any sign of Sydney where she's supposed to be at Ninth Circle- or ANYWHERE in Underworld ... Is she likely to be anywhere else? Still at Rivet City perhaps?