DR.LI Will no follow me through the tunnel! Why!?

While Madison Li will lead you to the tunnel, once inside, you must talk to her and ask her to follow or wait. If the group is following you when you encounter enemies (and there's one spot where they'll snipe at you from a catwalk above and behind you), the scientists will flee and possibly get killed.Shadowgm 17:06, 6 January 2009 (UTC)Shadowgm

look below to see where the guy suggests the ledge method. do this. BUT you cannot jump over railing. what you can do is if you have a missle launcher, and if you are trying to get the enclave soldier WITH the plasma rifle, and the tesla armor/helmet, is shoot behind him with the missle launcher. basically soot at ground, or wall over the top of him to utilize the blast to propel him towards you. do not worry about the gun at this point. get him close enough to your position to loot his body and you have access to his entire inventory. no one else had plasma or tesla on the catwalks. this is the only one worth all of the trouble. I HOPE THIS HELPS!!

How in the @#@$ do you get that barrel there to jump up to the upper level. I've been at it for an hour and the damned thing just bounces all around the room but will never stay there. Is there some trick to it?--DoubleGrande 09:15, 2 February 2009 (UTC)

Sweet Baby Jesus! I guess it takes morons an hour and ten minutes to do it. Can't believe I spent an hour just to loot some bodies, but I'm trying to be more complete the second time around, and I'd hate to think of the Enclave getting a proper burial with there armor recycled... --DoubleGrande 09:28, 2 February 2009 (UTC)

There's an easier way to get to the upper level than stacking barrels. In the second section, opposite the balcony where the Enclave soldiers ambush you, there's a roofed shed containing the eyebot helmet. You can jump onto the roof from the staircase behind the shed, and then walk along the very narrow ledge until you reach the beams from which it's possible to jump over the railings onto the upper area. 220.255.7.205 19:30, 16 February 2009 (UTC)

If you don't like stacking barrels or the roof approach, I've been able to jump on the pipes coming out of the floor, then onto the 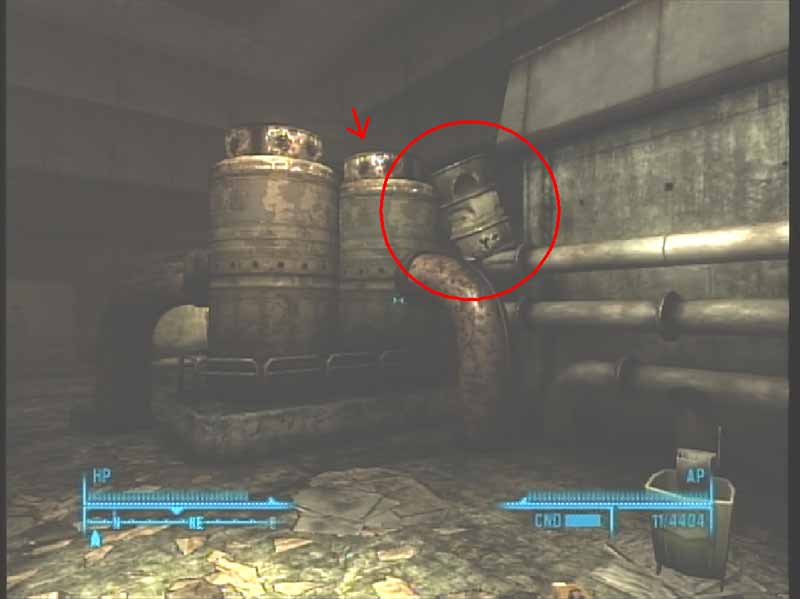 , then onto the walkway. My approach to the tank was from the behind the tank as it appears in the image. It can be annoying to try to get around the invisible walls to get on top of the tank, though. Unequip all armor and weapons to increase your agility, it seems to help. Jdw 20:05, 11 March 2009 (UTC)

I did an easy way: Just find a barrel and kick or drag it next to that place in the first picture. Then when you jump on top of it, before you jump to the white pipes on the wall look down and jump and press the grab button at the same time (and press the joystick down so you get on the pipes). Then try dragging the barrel next to the red pipe on the wall and jump on it, then jump on top of the big tanks and Viola! You got to the secret passage! --189.171.171.223 03:57, 29 March 2009 (UTC)Master B

I got a bug where my followers (dogmeat and Charon) suddenly appeared in the taft tunnels, which is a bit wierd since i told them to wait in my megaton house...

Thanx so much i really wanted that Chinese Hat

I was playing through this level today and I gave Daniel Agincourt my silenced 10mm pistol. Well, I decided I wanted it back, so I tried pickpocketing it back but he saw me, and started shooting me. To my great surprise Dr. Li comes running and socks him in the head! I decided this might be interesting to watch, so in the interest of a fair fight I shot the pistol out of Agincourt's hand and picked it up. After an entertaining couple of minutes Li had beaten Agincourt to death, but as soon as this happens Garza starts a boxing match with her and ends up dead as well...lol.

...anyone else had this/ tried getting this to happen?

in the room with the enclave ambush, the room in the very back with the inaccessible door, there is a spawning point for enclave soldiers. some have tesla armor. If you stand diagonal from the door, they keep coming and don't stop. ignore the two snipers on top and just go there. Happy hunting 98.110.156.66 03:39, 26 August 2009 (UTC)

I can't get far into the first section of tunnel after hacking the terminal without the game freezing. Seems to freeze either shortly after rounding the first bend, or turning back towards the scientists standing in the door. xbox 360. Anyway around this?

Methodology of gaining access to Enclave soldiers on catwalks

In the tunnels, the Enclave soldiers will ambush you from the apparently inaccessible catwalks, making looting them problematic. However, there are several means by which to reach these catwalks. This will allow you to loot the otherwise unreachable bodies, and kill the soldiers waiting at the second ambush point before they can see you. The first room with catwalks is the only place to do this. In this room, there is a ladder which the game treats like a door (it can be opened and closed but doesn't actually go anywhere), and a door to the second section of the tunnels from which you can sneak up on the second ambush group..

There are a couple methods of reaching the catwalks. One is to stack several barrels and use strategic jumping to make it up, as detailed in the images below. There is also a method which requires no barrels. First, jump on the white railing on the pictured generator on the side closest to the east wall. From there, jump to the nearest red pipe facing north. Aim for the curved part in order to get your footing. From there, jump on top of the large tank as pictured then onto the catwalk.

Xbox 360 and PS3 players can access the seemingly inaccessible area by kicking a barrel (which can be found in the surrounding area) into the corner of the room (below the catwalk leading to the upper level). Use the barrel to jump on to the pump housing (this may take a little bit of time), walk into the corner, and look up towards the bottom edge of the door and look around the area slowly until the 'open door' prompt appears.

Is this the only place that has IV Bags in the game, you open them and and can get two blood packs from them. (1 in each) the bags are clear, but they have a blood pack thats red inside of it.GodsHand 21:45, March 19, 2010 (UTC)

It is possible to come back (citadel entrance) after you've completed the Waters of Life and leveled up to high levels and find a Feral Ghoul Reaver down the path to the left immediately after the brotherhood checkpoint as well as a random second ghoul type if they were not killed during the quest. They can be lured to the checkpoint to kill the Brotherhood Paladin for his holotag without the player getting their hands dirty with murder (alternatively you can deactivate the turrets using Robotics Expert to make it easier if he did not lose enough health during the quest). Wear the ghoul mask into the room with the white picket fence, take it off (it's important to alert the reaver first to avoid unnecesarry health/armor damage) then run pausing briefly to let the two ghouls keep you in sight and baiting them to the checkpoint. If the Feral Ghoul Roamer soaks up the damage from the turrets for the Reaver it will usually kill the paladin and then subsequently be killed by the turrets. This paladin does not wear Brotherhood Power Armor but regular Power Armor yet he will drop a holotag. Mictlantecuhtli 17:37, August 12, 2010 (UTC)