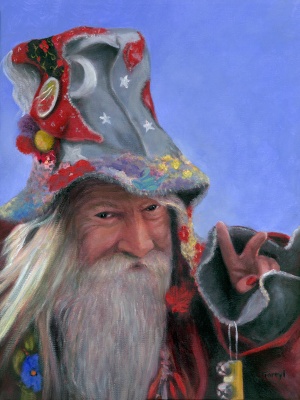 I think based on the name of the quest you will become infected with one of the factors thats mutating the hillfolk like you do in the sixth house base in morrowind and you are infected with the corpus disease, the icon for the walking with the spirits quest only furthers this67.186.39.155 22:58, 9 June 2009 (UTC)

Not likely, I highly doubt something is just going to infect you and here's an example of local flavor would be italian food in an Italian neighborhood so this might have something to do with food. Possibily Punga Fruit?

It seems as if Point Lookout is not activating. Whilst the other add-ons only took a few minutes to show a note and start the main quests, Point Lookout finished downloading about 45 minutes ago, and I still have yet to get a notification. What gives? Is this a problem? Do I just need to be patient? (I'm playing on Xbox 360)--68.235.139.164 00:53, 25 June 2009 (UTC)Pyro Penguin

Watchout when making the final stand

When defending with Desmond, try not to put too many mines. Any unexploded mines after the final Tribal assault can be tripped by Desmond making him hostile to you.

That you have to protect a zombie stuck in a mansion from invading humans?

Usually it's the other way around.

The waves of tribals in the last part of the quest

I guess the player with waves coming from the upper right, upper left, lower left, and center doorways was on the hardest difficulty? Playing on normal, I had 4 waves, coming from upper right, lower right, center, and lower left in that order. Can anyone confirm if it's always a predetermined order ? I could be wrong.--207.161.67.185 05:02, 10 August 2009 (UTC)

Noticed a bug when protecting Desmond from tribals:

When fighting off the first 3 tribals in the east wing with Desmond, the player may accidentally hit the marker that spawns a tribal that runs past the furniture barricade blocking a corridor. If the tribal is spawned, Desmond will sometimes start searching for him infinitely, instead of giving the player instructions to clear the east wing.

This will prevent Desmond and the tribal from searching for each other, since they won't be hostile towards each other any longer. WRFan 15:09, December 10, 2009 (UTC)

In that part of the mission where you mis-step, and smash through 2 floors and end up in the basement, is the tribal trying to open the door with an axe a reference to the shining?

I run the PC version with numerous mods so there may be some involvement with that, which is why i'm not reporting it on the page as a bug right now. Anyone else had this problem?

can someone tell me why the tribals are so powerful?

I don't remember the specifics, but the tribals get a bonus so they do like +40 damage that ignores DR or something ridiculous like that. Can make it quite frustrating and difficult to fight them without lots of stimpacks. 174.29.168.88 04:21, April 29, 2010 (UTC)

"There is a mini-nuke under the buoy that is closest to the dock along with other goods." I have looked under all the buoys around the Duchess Gambit and I can't find anything. I don't suppose anyone has a better idea where this stuff is?

Sealing the breach no.2

The article says that both rooms with breaches have red pipes to shoot. In my case, however, first one had a red gas tank (misinterpretation?) and the second one had nothing but a gas leak, which, when ignited, sealed off the breach. Where's the truth?

Bug with the dogs

When I played this quest one of the dog's managed to glitch themselves behind the first door the Tribal's come out of during the final assualt, so when the first wave came the dog was instantly knocked unconcoius due to the amount of firepower directed at it Has anyone else had this happen? I think this should be on the main page under "Bugs" 69.177.38.221 21:07, August 31, 2010 (UTC)

After helping Desmond fend off the attackers from the bathroom , I went outside and fast traveled to the army recruiting station to drop off some gear. I fast traveled back to the mansion and went to the dining area, laid some mines and noticed the attackers didnt "spawn" or fall through, tried knocking desmond out, exiting and entering, reloading an autosave.

Need to reload a save before entering the mansion for the first time.

Alright, I got a strange bug when trying to block off the holes in those areas. In the west wing, the tank you shoot to seal off the room has refused to spawn. In the east wing it DOES spawn, but when shot, it just bounces around, blows up, doesn't despawn, and still doesn't seal the room. Any way to fix this without stringing out the quest on the console? PC/GoTY edition. --Revolverman 22:12, July 22, 2011 (UTC)