When I sent the hostage in, he blew up (duh). But then the sound in the game started acting all weird, apparently due to the explosion. Also, all dialogue afterwards was rushed and I couldn't hear it. It made it hard to talk with the Rangers at first, but it also affected everyone in the game, even the father and people as far away as in Oasis or Tenpenny Tower.

I've notice this happen every once in a while. It's not always an explosion that causes it though (just playing for too long, explosions, or even something like the rivet city bridge moving to let you come over). It's definantely annoying though 205.242.95.138 09:32, February 16, 2010 (UTC)

Is it possible that this "Mad Preacher" is a refrence to Father Grigori from HL2? He's mad, and sets traps...

I doubt it. Grigori was arguably sane, helpful to the PC, knew what he was doing, and was capable of coherent conversation and rational thought. The madman (I hesitate to call him a preacher) can barely string two words together coherently, let alone an entire sentence, and is a completely ignorable hindrance.Bsdasym 23:51, 5 January 2009 (UTC)

Most of what he says seems to be more of a reference to something rather than just random ramblings. Examples:

"And the sun will rise in the north! No! the northwest! For forty-four days and sixty-seven nights! And we'll never notice!"I'm not quite sure what that's refferring to, but the total of days and night's is 111, I wouldn't brush that off as something unintended.

"THE SUN! IT BURNS! Why does it burn? Why have we put the sun into a jar? And what did we do with that jar? We broke it all over our little world..." This would be a reference to the great war with it's atomic explosions.

"In fourteen hundred and ninety-two, your mother and my mother were hanging up clothes around the mulberry bush..." Probably an easter egg from the creators... Wikipedia-Year 1492 (MCDXCII) was a leap year starting on Sunday (link will display the full calendar) of the Julian calendar. In Slavonic countries according to old dating "from the creation of the world" it was year 7000, which many thought would become the end of the ancient world, the Apocalypse. With the discovery of The New World, the prognosis was thought to be true.

"Oh... God... it hurts. My head... why doesn't it ever stop hurting... why? Please... please I can hear it! Moving! Pulsing! Just leave me alone!" Sounds like he's doing this based off of some sort of mind control or something.... mesmetron? sap from oasis? idk

"Beware, worm! I shall destroy you! With the fire of this small sun before me! BEWARE WORM! Not one step further!" Not really sure what the worm would be, but the 'small sun before [him]' is probably a mini nuke.

Did you know he refrences oasis as well? "Trees! So many trees! To the north! But be careful... the trees... are deadly, and the trees too will be consumed in the belly of the great fat worm!" So I'm reckoning that he's one of the people that Harlod mentions that "see [him] and run off screaming" after trying the sap

Maybe it's just me, but after listening to the Mad Preacher talk, I swear that he is voice-overed by the same guy that played Hades in Disney's "Hercules". Anyone know if that's true?

Maybe that s what that 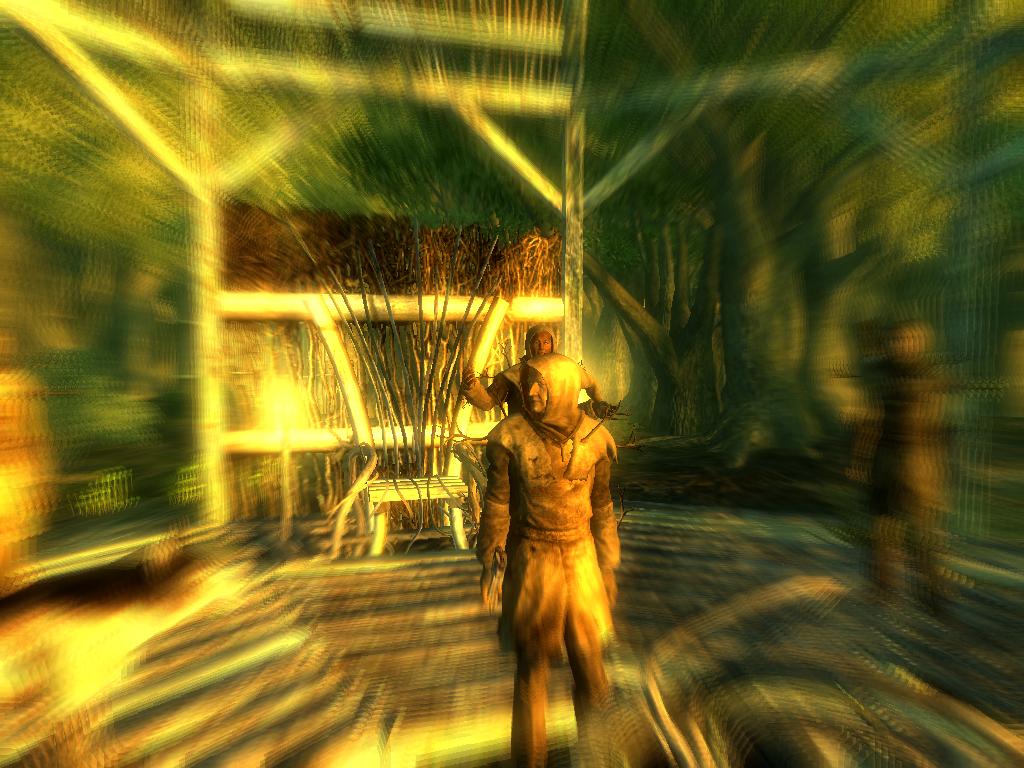 From what I can see (see: imdb), the voice actor for the preacher is Paul Eiding. Paul Eiding is apparently also credited for Abraham Washington, Nathan Vargas, Tree Father Birch, Evan King, Arkansas, Father Clifford, and Irving Cheng, among others. --GlowPen 00:13, June 25, 2011 (UTC)

I don't know if anyone else finds this annoying, but his ingame name is wastelander. Where did the name "Mad Preacher" come from? Is it in the geck? Just because a crazy guy is yelling, doesn't mean he is a mad preacher. I find this very annoying and I believe he should be referred to as wastelander (to keep accuracy of the game) and not a made up name, unless of course it's in the geck and then never mind. Reflect 09:11, 2 June 2009 (UTC)

Because we already have a Wastelander article and a generic name doesn't reflect this character's nature and behaviour. That Furry Bastard 09:17, 2 June 2009 (UTC)

Don't know where the "mad" is coming from, but his GECK name is FFDCAdamsMorganPreacher and he is called "The Preacher" in the Fallout 3 Official Game Guide, so that's where that part of his name is coming from. Calling him Wastelander all the time wouldn't be very helpful anyway in my opinion; after all, the other NPC involved in this encounter is also simply called Wastelander, could get confusing. -- Porter21 (talk) 09:20, 2 June 2009 (UTC)

Yeah I thought that it too would get confusing, but creating a made up name didn't seem right either. Well actually since his name is in the geck as preacher then I understand (I thought it may be there, lol). I guess I was just confused on where its coming from as I don't own the guide and don't have a guide or the pc version. So now I'm wondering if he has a name why didn't they assign it to him in the game? I assume Adams Morgan or Morgan Adams is his name? Reflect 22:09, 2 June 2009 (UTC)

Adams Morgan is a culturally diverse neighborhood in Northwest Washington, D.C., centered at the intersection of 18th Street and Columbia Road. Adams Morgan is considered the heart of Washington's Latino community, and is a major night life area with many bars and restaurants, particularly along 18th Street, the main commercial street. Much of the neighborhood is composed of 19th- and early 20th-century row houses and apartment buildings.

Yup, judging by the map it's his location. The other wastelander is called AdamsMorganCrazedWastelander, I think that rules out it being his name anyway :) -- Porter21 (talk) 22:24, 2 June 2009 (UTC)

I don't think it makes much of a difference whether we call him "The Preacher" or "Preacher" ;) The "Mad Preacher" stuff was a leftover from an old version of the article, before it was moved to the current name. I removed it a couple of hours ago. -- Porter21 (talk) 22:33, 2 June 2009 (UTC)

lol at my ignorance, sounded like a persons name. Anyway I thought the same thing. If they named him preacher, why did they name him wastelander ingame? Mix up maybe or they forgot to? hmm... Reflect 06:10, 3 June 2009 (UTC)

I'd guess that his name is also a reference to Dune. In the 3rd book, the main character from the first book is known as the preacher. Also, that quote regarding the trees being eaten by the great fat worm; it's later revealed that sandworms being introduced to a fertile planet eventually result in it becoming a desert planet.

When I first went there during Reilly's Rangers quest, the hostage was on the wrong side and ran from the nearby Enclave, and straight down the alley, killing the preacher, me, him and Fawkes

The article says you need Stealth Boys or the Chinese Stealth Armor, but you can do it 'naturally'. With 100 Stealth, I managed to disarm everything and take him out without being detected. I entered the side of the alley the hostage WASN'T on, hugged the wall, and worked my way in very, very slowly. The trick: wait until night. (Although you could probably do it during the day...the preacher always caught me on the one under the slide.) Worth adding to the article? --Skeeter Valentine 23:25, 14 August 2009 (UTC)

Make it your trap

It's possible to lure the super mutants nearby into the alley. Make sure they follow you an crouch trough the alley. At the end make sure you set of the last bomb. (you will hear the sound of a mine but you will have a few seconds to get out) After the explosion, super mutant bits where everywhere.

If the wastelander on the ground is still alive, it's possible he will flee into the alley and set of the traps. Watch out for this.

I cant get all the mini nukes cos I cant shoot him can you get all the stuff in the alley? starship trooper

use a scoped weapon. i used the .44 magnum, although a sniper rifle is probably easier. make sure you're crouched though.

Mine in the sky

I just shot the guy in the head and looted the alley, but I also found a mine stuck in the sky. When I shot it down it landed on the other side of the building opposite of the preacher.

This is possibly meant to be a hidden thing that the developers put in as a means of triggering the explosions. ThePog 14:59, January 4, 2010 (UTC)

I Shot the guy with my scoped 44. Magnum. One bullet and he was gone. But I noticed no karma change. Anyone actually had a karma change killing him? I can guess why he's neutral; he's got a hostage and bombs which could make him evil, but he's also clearly out of his mind which balances it out.--A Pickering 21:49, January 4, 2010 (UTC)

Yep, killing him has no karma effect. If anything it should be positive despite his mental condition, because there's no possible peaceful resolution, but I'll take the non-karma result instead. Kris (talk) 02:25, August 6, 2010 (UTC)

If you nock him down with the gauss rifle, does he detonate the explosives?

I notice that there are 9 quotes listed for this character in the notable quotes section. Isn't there normally supposed to be a limit of 5 notable quotes? Should this NPC be an exception to that rule, since his quotes are all that make him stand out from the other Wastelanders, or should we pare down the list? My opinion: let him remain an exception. Kris mailbox 17:07, August 11, 2010 (UTC)

It's remarkably simple to toggle player hostility on a character. So the ear itself wouldn't have prevented the Preacher from attacking the Lone Wanderer. I would say he has good karma. He's crazy... but good. Kastera1000 22:41, February 17, 2011 (UTC)

He has an alien worm inside his head

My guess is this guy has an alien worm inside his head and it's controlling him and/or driving him crazy. A lot of movies/shows used this as a plot device, maybe it's a spoof on a specific movie, but I can't think of any. Rolen47 08:15, May 31, 2011 (UTC)

That's similar to what I thought from listening to his rantings, but my theory is slightly different:

.. on the basis that it's almost certainly untrue. If it is true, the updater needs to provide more info - what is this second 'quest', what are the clues and what/where exactly is the so called weapons cache? —Preceding unsigned comment added by 82.46.18.11 (talk • contribs). Please sign your posts with ~~~~!

someone re-added it. I'll remove it. --Kris

I plan on doing the Oasis quest soon, and he's still alive in that save file, I'll go and revisit him after completing it to check the validity of this claim. Tanya Sapien 4:54AM 9/4/2011