From The Vault - Fallout Wiki
(Redirected from Talk:Tranquility Lane)
Jump to: navigation, search

The screen freezing bug is really terrible. I tried the fix listed here and got about 20 steps farther into the simulations before it crashed.

Somehow, I managed to get the chinese commandos to retaliate after i performed a sneak attack critical to one of them. I tested this a second time and got the same result. I was playing on a 360 with the latest updates. I'd suggest that this should go in "bugs" as this isn't supposed to happen. Sir Jcd 16:31, June 13, 2010 (UTC)

I have found a manhole somewhere in a rocky area in fallout 3 that contains a radio room and two dead chinese soldiers complete with uniforms and chinese hats. But I cant remember where it was does anyone know the location?

As Ausir suggested back in 2008, I think we should split this page into 2, 1 for the quest the other the simulation, and make this page a disambiguation page because Tranquility Lane is a location but also a quest. Anyone else think we should do this? Chiefsean16 16:53, July 6, 2010 (UTC)

I disagree. Having the location and the quest in the same page makes for an unusual page that doesn't conform to the style of any other page on the wiki. --Kris

But having the location page is also unusual, because Tranquility Lane can only be visited once, and doesn't follow the normal rules of the game. Nitty Tok. 17:35, September 4, 2010 (UTC)

But the simulation and the quest are two very different things. The location IS NOT the quest. Tezzla Cannon

They are? There are things in Tranquility Lane that aren't directly related to the quest? Since when? Nitty Tok. 17:37, September 4, 2010 (UTC)

To back this up, let me just point out Anchorage Reclamation simulation, a similar location; though larger in scope, it's also a place that can only be visited once, and only on a certain questline. For that matter there's also Raven Rock; while not a simulation, it, too can only be visited once, and only while on a certain quest. Each of those locations are separate from the quest article. --Kris

Anchorage has several little locations in it, and they don't have individual pages either. How will the Tranquility Lane page be anything than a repeat of all of the stuff on the quest article? Nitty Tok. 17:40, September 4, 2010 (UTC)

This location wouldn't need a notable loot section - since there's nothing in there that doesn't relate to the quest - and could go into detail about the individual houses in the simulation. It would also cover the notes and bugs related to the location rather than the quest. --Kris

Into detail about the houses? The houses need detail on their own pages, not on the location page. There's nothing at all in Tranquility Lane that isn't directly related to the quest, so it should be fine. Anything in the houses can stay on the house pages. Nitty Tok. 17:48, September 4, 2010 (UTC)

It can also cover up info on the simulation mentioned on the failsafe. Tezzla Cannon

Does anyone remember if the failsafe said that if they initiated the chinese soldiers that if they killed the ppl then it would kill them in real life?

Yep. Kris mailbox 00:20, August 11, 2010 (UTC)
You can find that information in several places on the Failsafe terminal, for instance, in the letter to Braun from the general who provided him with a copy of the simulation program. Wunengzi 10:34, August 20, 2010 (UTC)

All residents not killed

When I ran through this on the PC, one male resident -- I forget his name -- did not leave his house and so was not killed by the Chinese soldiers. He just sat on his couch and when I addressed him, seemed to be unaware of the attack. I waited a long time for him to emerge, but he stayed put. When I left Tranquility Lane, he was still there and still alive. Wunengzi 10:39, August 20, 2010 (UTC)

The article says through 'console commands' you can get Braun to come out of his tranquility pod thingy... does anyone know how to achieve this?

Can anyone confirm for me if this is the furthest point in the main quest which can be reached if wanting to skip as much as possible?

Yes, this is it. You can't skip to any later point in the main quest. --Kris

Sorry but it's wrong. You can skip entirely the main quest up to "Picking up the trail", by exploiting the famous glitch that allows you entrance to the Citadel before the story officially grants you the access. If you check information about Vault 87 on the old Vault-Tec terminal in the A-Ring, the quest will start.

Then you can talk to Rothschild, and go to Little Lamplight. Again you can skip "Rescue from Paradise" if you successfully pass the speech check with Mayor McCreedy, who will then open the door for you to Murder Path where you can run to the vault entrance and immediately start "Finding the garden of eden".

Judging from the mask and the type of knife I believe the last game played is a reference to Halloween. Micheal Myers wore a similar mask and used a similar knife to kill people when he was a child.Alpha Lycos 05:41, September 13, 2010 (UTC)

Failsafe resurrection is not a bug

I'm sorry that I moved it to notes, rather than putting it here, but I'm convinced that resurrection of everyone after the failsafe is activated isn't a bug.

Why, you ask? Didn't I just become the pint-sized slasher and kill off everyone?

Indeed you did, but I don't believe that the people killed inside the simulation when the failsafe is off are actually killed, but rather kept in in some sort of limbo state, before Braun resurrects them again. That's why you lose karma for killing them, they're technically still alive in that hell.

at mrs henderson's im stuck. the doors locked and it says i need a key to unlock it but i cant find one. any sugestions

I noticed that the address of the rest home in the Twilight Zone episode "Static" is located on one "Tranquility Lane". Could be a coincidence but I thought it was worth mentioning. The sign with the address can be seen in the opening scene before Rod Serling's introduction speech in case anyone wants to verify this.

I'd call that a coincidence. "Tranquility Lane" is just your easy-to-come-up-with literary ironic name for a secretly corrupt outwardly pleasant place.--Gothemasticator 02:57, January 2, 2011 (UTC)

A 'before you enter the simulation' Addition to the "Tranquility Lane" quest should be added. If anyone would be so kind as to add it!

Many people have experienced a glitch if they have a follower with them at the start of the simulation. After exiting Tranquility Lane the NPC will have disappeared. Sometimes they go back to their original locations, many times they simply are non-existent. In order to get around this, have your NPC wait outside the door you enter and first see the robot that gives you the vault 112 suit. Then after you exit the simulation, as you run up, they will be right where you left them.

I did this quest forever ago, and just lately noticed that i got no trophy for completing it. I have no saves, so i am undeniably screwed, but just wanted to know if anyone else had this same problem.

I can take one real quick. 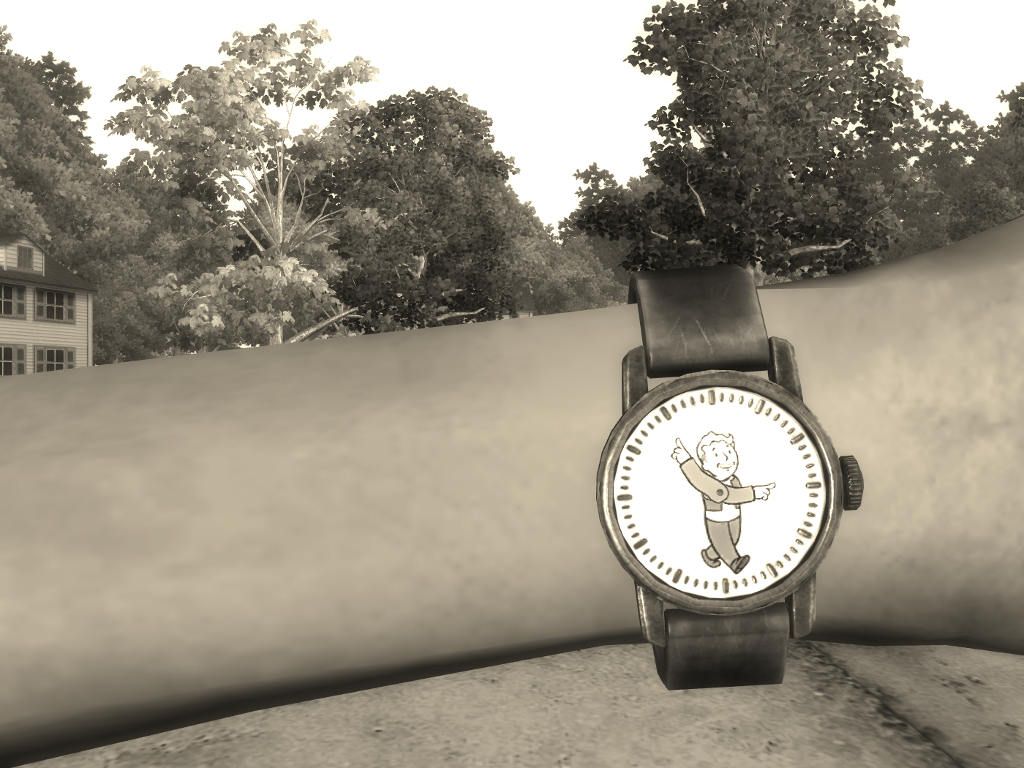 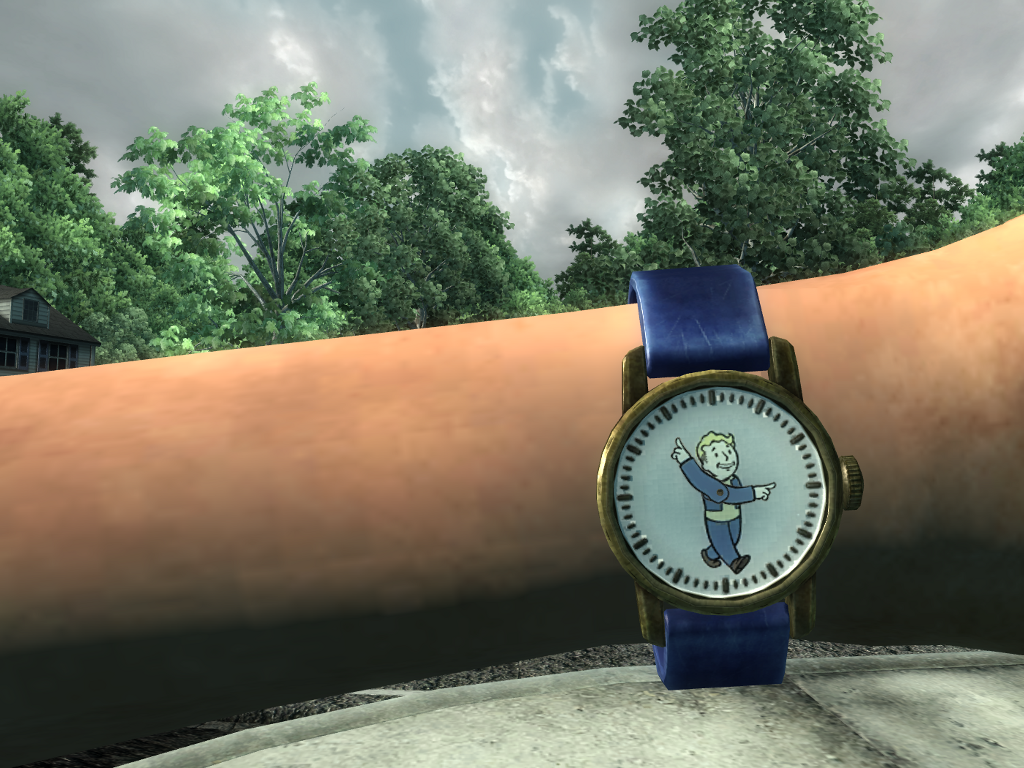 Because of a bug, if you have the Xbox 360 version, however, if save your game and then load it during the quest inside the simulation, Tranquility Lane will be in color as well.

It's obvious why Braun was immune to the chinese invasion but is there any explanation why the fail-safe didn't kill you and your dad? Reading the entries on the fail-safe computer I got the impression that it would kill EVERYONE except Braun. Dithers never mentioned you being safe either she just went on about ending "our" torment. So I became the pint-sized slasher instead... This was before I started using wikis... Did they ever explain why you and dad weren't killed?184.145.22.2 07:13, October 27, 2011 (UTC)

2. The Chinese commandos don't plan to attack you because you activated the failsafe, and don't realize that you are part of the simulation. Besides, not all safety chips are disabled.