The site the scavenger spawns at is randomized with other possible NPC encounters. Before entering the area I quicksaved. The first time through I got the scavenger by the burning barrel, he had a pack brahmin and was stationary at that spot with the usual talk options for buying and selling. For another reason I later had to quick load the prior save and re-enter the area. The second time through there was no burning barrel, but a nomadic scavenger with a missle launcher on the move with a pet Yao Guai in tow. Besides having to chase him down, his dialogue required some persuasion before he would sell, but he did have more useful merchandise such as good quantities of ammo, unlike the stationary scavenger. I tried a 3rd quick load and this time when I went down to the barrel spot, a dead wastelander lay there, no pets, but a giant ant hovering around. The 4th time I went down to the barrel spot, I was accosted by "Mel" who tried to mug me, but with some persuasion went into a cowering mode. I tried re-entering the area a few times and got an amusing combinations of spawns. Once I went in and a wastelander with a bomb strapped to himself ran up to me telling me Raiders had strapped a bomb to him and would I defuse the bomb. Failing that task, he exploded and killed my companion, RL-3. Two Raiders in hot pursuit then started firing on my already crippled body. Reload. Over a number of retries, the vast majority of spwans were the nomadic scavenger with the pet Yao Guai, usually being chased by either 4 mole rats or by a feral Yao Guai who had been attacking the Raiders nearby. I only got the stationary burning-barrel scavenger once. --Ari Solis 19:50, 29 December 2008 (UTC) 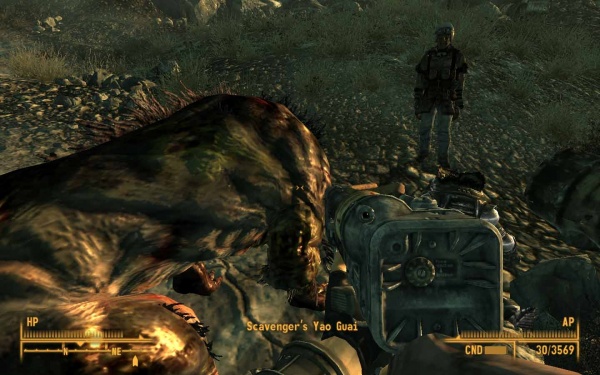 One of the possible scavenger spawns at the barrel

My last attempt to enter the barrel area yielded another random encounter which I had never seen before: three Wastelanders being chased by a Death Claw. One wastelander, armed only with a pool cue, had died. I finished off the Death Claw, and spoke to one of the remaining Wastelanders. The remaining Wastelanders immediately proclaimed their goal was too dangerous and they were giving up to go somewhere safe. He then handed over a map which appears in the "Notes" of your Pip-Boy with the description: The map shows directions to Rock Creek Caverns, with the notation: "Mirelurk King's Treasure Chamber!" The ref ids of the 3 wastelanders were: 31e2b, 31e2c, 31e2d. --Ari Solis 20:28, 29 December 2008 (UTC)

I didn't get the burning barrel or any NPCs. I approached the station and there were about 5 raider corpses scattered about. Close was a dead Yao Guai, then I started hearing a faint growling noise and I noticed a red dot in my map, I approached the back of the truck and the noise got stronger, I switched to 3rd person to take a look around and there was another Yao sleeping right in the entrance to the trailer with its head outside, just like a dog in its doghouse. Cool Fallout 3 moment. --Penumbra 22:53, 9 April 2009 (UTC)