Is there proof that the PC will have to shave his/her head? It kind of makes this DLC unappealing for me, considering Wadsworth, Butch, and Snowflake coincidentally perished in unforseen Missile Launcher "malfunctions"... Wanderer Lao 14:59, 15 June 2009 (UTC)

Aye, but I think Wanderer Lao's concern is that there is no one left in his game to put his hairstyle BACK afterwards. Of course, that's entirely his fault, and I have no sympathy. "Malfunctions," indeed...! (Especially with Wadsworth being the only source of infinite, free, pure water in the entire wasteland... long before Project Purity was ever completed!) Still... who cares about whether or not your character has hair, when you're wearing Ledoux's Hockey Mask all the time anyway, amirite?12.204.48.130 07:22, 18 June 2009 (UTC)

Well, F.M.S., I still don't buy it. Even though the scrapper has his head shaved, it still doesn't convince me that it will happed to the player character. Now that I think about it, I'm feeling that Walking with Spirits would be more of a drug-induced trippy thing from the tribals maybe, a la Treeminders. Wanderer Lao 23:48, 20 June 2009 (UTC)

In gameplay video (Which has been pulled), there was a section in which you walk through a swamp filled with corpses of your friends. (Amata, dad, elder lyons) Also shown was the player drinking from a tree... thing and falling over. Fat Man Spoon 23:54, 20 June 2009 (UTC)

I don't know if this should be added, but you can attack Mister Break. He will turn hostile and shoot back. It will hurt you. If you "kill" him, he will become unconscious. He will then begin to shoot you again when he gets back up if you don't detonate the bomb by then. Also, the bomb will detonate if you try to go too far past it. -Ganon

Well OF COURSE your character doesn't have any long-term negative effects from this. I've been shot in the head thousands of times with everything from .32s to plasma rifles to the Robobrain's psychic attack. I've actually had my head crippled at least a dozen times. All I need to do is inject a stimpack and voila, it's all healed, and I still retain an Int of 10! The brain tissue probably came back even before he was done sewing it up, and the only reason there was a scar there was because of the stitches. "Terrible sense of loss" my ass. 96.3.144.43 02:19, September 28, 2009 (UTC)

Seems like metal; gear solid 3......with the weird thing that you approach and hallucinate...plus theres soem corpses of people (I saw dead settler,amata,moria brown and elder lions) as well as mister burke standing next to the megaton bomb in the swamp...upon activating him some stuff is mumbled before the bomb goes boom...but you remain ok....thats all the footage i saw Butter 15:13, 20 June 2009 (UTC)

Reminds me of Max Payne. When you get dosed with the Valkyr and have that tedious maze puzzle I mean drug-induced hallucination where you're walking on smears of blood in an endless black abyss while you hear your family screaming when you walk past invisible trigger points.

about shaving your head..

YOU DO GET YOUR HEAD SHAVED

along with that you get a huge scar across your head (play the game to figure out why) but don't worry. Catherine's daughter (i forget her name) can put you back to normal i think (i personally kept the hairstyle)--Attnet 06:27, 24 June 2009 (UTC)

It isn't possible to keep the scar, it's automatically removed upon returning to the capital wasteland. In related news, if you speak to nadine about removing it, you start a sequence of events leading up to free trips to and from point lookout. I'm personally, very, very disappointed...66.82.162.10 23:29, 24 June 2009 (UTC)

The whole scar this is pissing me off. They could have made it so much cooler, I've really enjoyed most of Point Lookout, by far some of the best DLC that has come out. But whole trippy part could have been pushed so much further and made much insane. I feel like they dropped the ball a lot. Also, the fact that you cannot keep the scar is bullshit and it's also bullshit that the scar does not heal after time, it should just become lesser and lesser. Also, why can I equip a hockey mask, but not a hate? Stupid stupid..

I wish you could keep the scar and still wear hats just for a cool war scar kind of thing.

CTD upon entering the Bog?

I noticed that too. And they go "Goo goo ga ga" when they explode. 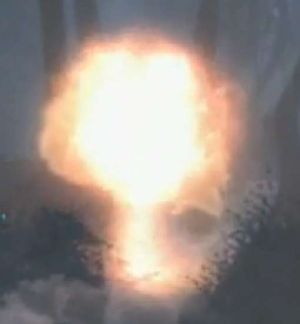 Yes, they explode in the form of a mushrom cloud when you get close to them. which you can find the bubblehead of agility nearby saying: "Why does everything you get close to always end up leaving?"--Master of cheeZ 23:13, 17 July 2009 (UTC)

Indeed it is strange. If you guys want an explanation of the hallucination, look below to my category below.

A simple explanation of the hallucination

"Schmault-tec Bubbleheads" - An assessment of the real and fake worlds Violin Trees - Random bullshit Giant, red, tranlucent Bonesaw - Tobar cutting into your skull Exploding Quantums - More random bullshit Ghouls - Some more random bullshit Dolls waving - EVEN MORE RANDOM BULLSHIT Upside-down trees - Not sure about this one Sewing Needles - Stitching up your wound Mom and the Bubblehead - Informing you about your new, ugly scar Random corpses - Also unsure, maybe you unconsciously speaking your mind about those specific characters Mister Break and the bomb - Mister Break is Tobar telling you to "go slow" and the bomb exploding was

Glad I could help. D3V0NST8R

Not sure about these. Thanks though.

I couldnt really make much sense of it.

I have a problem with the part about the adamantium skeleton perk. Mainly because this seems somewhat pedantic and is completely ridiculous. Whoever wrote that makes a statement about a saw being unable to cut through the skull but sees no issue with someone getting their skull metal plated post apocalypse.Vladras Dracule 01:57, October 23, 2009 (UTC)

After I took the seeds and woke up again, my weight limit had increased from 300 to 800!. Of course it was just a hallucination, anyone else get this?.

Look at the trees!

During the halucination some of the trees appear to be shaped like violins. Could be a reference to Agathas sratavarius. Would be interesting to know if people who havent done Agathas quest can see them. This is my second playthough im pretty sure i diddnt see them first time round. May be worth mentioning that both times in the halucination I never saw a single Ghoul.

(this is a separate person posting now. Sorry I don't know how to respond >_<)I haven't visited Agatha yet or completed her quest, OR visited/discovered the vault where you get her violin (though I have done all those things on previous playthroughs), and I still saw the violin trees. I didn't hear the music that was present in a youtube video I watched of the quest, but maybe my music setting was low.

The ghouls in the hallucination

I know it's not the best picture ever, but I encountered a visible ghoul during my hallucination. TrailerParkApe 18:23, August 26, 2010 (UTC) 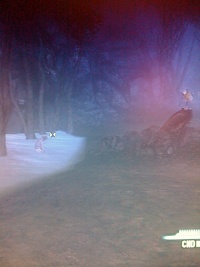 Of course I am! The weird thing was that they couldn't be targeted in VATS. They don't exist! They are just a figment of my imagination, or should I say the Lone Wanderer's? The funny thing was that you could kill them and gain XP. TrailerParkApe Spew 19:05, August 26, 2010 (UTC)

he scar will be removed if you leave Point Lookout before visiting Nadine, you won't get the dialogue from her to remove it so make sure you have the ghoul mask before you attempt Walking with Spirits

What does this mean? What does the ghoul mask have to do with anything?

Just completed Walking with Spirits, and noticed that my Rad level had decreased dramatically. I reloaded a save and saw that this effect occuring when I picked up the punga seeds. Picking them up had reduced my rad level to 0, actually. Has this happened to anyone else? --Unregistered Contributor

It is odd that some head gear you can wear with the scar and some head gear you can not. I think the intent that you could not wear anything on your head and that is is automatically removed when you leave the cave (you can hear the sound), but it is a bug that some head gear remains on and can be worn. First time I played this I hadn't noticed anything wrong until a slow motion in VATS showed me with a shaved head and I was greatly surprised (the intended effect). Second play though I kept my head gear and it's only obvious something is wrong if you adjust camera angle until you can see part of a scar. Ie, pre-war hat can not be worn but the pre-war baseball cap is usable. You can also use the police cap and (surpisingly) Raider Aclight Helmet, possibly others. 108.225.190.76 06:45, 30 September 2013 (UTC)