While playing around in the weapons lab i come across the shooting range, I press the button and 5 albino radscorpians spawn killing the raiders instantly. For fun I pressed the button again and 4 more albinos spawn, pretty soon the entire range is filled with albinos climbing all over each other.

I'm sure this is rare but in my game (360) an albino managed to glitch it's way up to the top floor after it wiped out the raiders. Needless to say I was kind of shocked to suddenly die while shooting cows.

yeah, happened to me too. an albino spawned in the left teleport thingy and started to float in the air. then it disappeared.i ignored it and a few minutes later the albino was right next to me. well at least i didn't die :)

AHHHH IT'S CHASING ME RIGHT NOW!!! HELP!!!! *FLEES* No, seriously. I spawned WAAAAY too many. Like 2 dozen. At least one got up.

While in the middle of shooting a standard Drone Cannon at Albino Radscorpions in the test range I received text announcements that I'd disabled the deathray and had reached the bridge. This glitch occurred again with the Drone Cannon Ex-B as show: 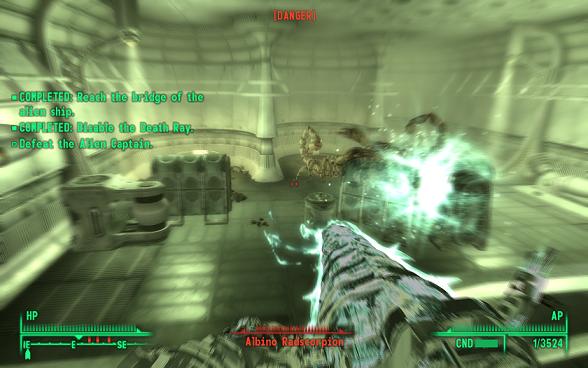 Each time I'd just received the Xenotech perk a few seconds earlier, I was wearing Chinese Stealth Arm and a Guardian Drone was to my right assisting me. --Phiont 21:30, 6 August 2009 (UTC)

Hey, so does anyone know if it's possible to loot the range? Cause there's a lot of really good loot down there and if you could get down it would be very nice lol, maybe i'm just being greedy cause you get loads of junk during the course of the DLC

There's more than just the radscorpions and raiders that come out of the teleporters in the fortified range.

Is there a conclusive list of weapons? I think weapons like Paulson's Revolver(Which rocks btw :D) are not included but is a Zeta addon weapon. GunInEveryHome 06:40, November 8, 2009 (UTC)

Whenever I play the shooting range, I can never get any albino radscorpions to appear. I am a level 25 (although I become level 26 very quickly after playing the range a little) on the X360. I would like to know why no radscorpions ever spawn.