From The Vault - Fallout Wiki
(Redirected from Talking deathclaw)
Jump to: navigation, search

Intelligent deathclaws are a variety of the dangerous reptilian species that was experimented on by the Enclave, which gave them higher intelligence and the ability to speak. 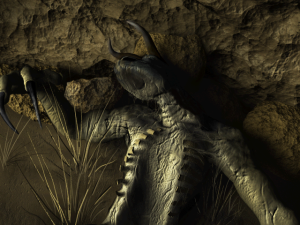 By eliminating the deathclaws of Vault 13 the Chosen One banished yet another species to the realms of extinction, proving, once again, that genocide is a viable solution to any problem...

In 2235,[1] the Enclave captured many deathclaws and after the discovery of the Mariposa Military Base exposed them to FEV.[2] This boosted their intelligence, giving them the ability to talk with varying degrees of erudition and articulation.[3][4][5][6]

While the Enclave hoped that the deathclaws would be intelligent enough to obey orders without being so intelligent as to question them,[7][8] the Enclave's deathclaws began to doubt the morality of their masters. While they helped the Enclave in storming Vault 13 in 2241 and kidnapping the population, they later abandoned the Enclave, adopting the now-empty vault as their new home under the leadership of Gruthar.

Several humans from the surrounding area moved into the vault to live under the protection of the deathclaws, but not all were pleased with these new neighbors. One human, Matt, struck against the deathclaws by bombing the mother and hatchlings (the deathclaw mother survived, but security was tightened from then on). The deathclaws faced other problems adapting to life in the vault, as well: after the overthrow of the paranoid Overseer, the dwellers of Vault 13 had turned day-to-day operations of the vault over to a Brotherhood-technology based computer. The only way the deathclaws could interact with it was by voice commands; this became a severe problem when the computer's voice module was sabotaged by Matt.[9] Fortunately, a traveling tribal known as the Chosen One had a replacement voice module, and was willing to install his in exchange for Gruthar's help in finding a GECK, one of which Gruthar had within the vault's storage area.[10]

The deathclaws paid a high price for their rebellion, however: an Enclave team, lead by Frank Horrigan, attacked Vault 13 and massacred the deathclaws (and presumably those humans under their protection). Of Vault 13's inhabitants, only Xarn[11] and Goris survived thanks to the Chosen One's actions. Canonically, Xarn and Goris were the only intelligent deathclaws to survive the events of Fallout 2. According to some reports, they did not, however, reproduce, and were the last of their kind.[12] Whether this will hold true in the future remains to be seen.

This subspecies was highly intelligent, about the equivalent of an eight-year-old, with some individuals on par with average adult humans. Their learning capacity was very high and they were capable of abstract thought and reasoning. Although they did not have vocal cords, the deathclaws seemed to mimic human speech the same as a parrot does. Socially, they had rigidly hierarchical, peaceful, pack-based ethical code. They were extremely loyal to the pack as a whole, treating it as a family unit rather than having individual families. Fights within a pack are unheard of, and the pack's leader controls many aspects of life, such as choosing and matching female and male deathclaws for reproduction. Oddly enough, deathclaws are not subject to sterility from FEV exposure; this trait is not explained.

Intelligent deathclaws appear only in Fallout 2.