A tank is a tracked, armored fighting vehicle designed for front-line combat which combines operational mobility and tactical offensive and defensive capabilities. In modern combat, its role has been largely supplanted by power armor.[1]

This tank is a heavily modified M4 Sherman battle tank, which has seen extensive modification over the years. Although woefully outdated by the 21st century, in the resource-deprived reality of the wastelands, it is a veritable juggernaut. It is heavy, yes, and very slow, yes, but the sloped steel armor makes it nigh invulnerable to most infantry weapons, short of explosives and anti-tank weaponry. It retains its primary 75mm gun mounted on a fully traversing turret, with a gyrostabilizer enabling the crew to fire with reasonable accuracy while the tank was on the move. However, the range of the gun was reduced severely when raiders tried to rebore the barrel and failed.[2]

Gameplay article:
none (mentioned in Fallout)

The IS-2 was the heavy tank of the Soviet Union's Red Army in the late stages of World War 2. The entire IS tank line was developed as a replacement of the aging and outdated KV tank series. Lighter, faster and harder hitting than the old KVs, the IS was equipped with a 122mm gun capable of penetrating any German tank or fortification it came across and was primarily used as a breakthrough tank in assaults. The IS series saw new variants developed after the war, but became obsolete after the emergence of the main battle tank concept. The Soviets retired the IS from service, but continued its service in other communist countries.

Gameplay article:
none (mentioned in Fallout 3) 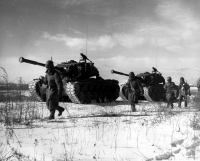 The United States military utilized modern, conventional main battle tanks as late as 2066, before the resource crisis prompted the switchover to power armor. These were conservative designs, with a traversing turret, single cannon, and a rear-mounted engine.[4][5][6][7][8]

The United States military has also utilized heavy duty conventional main battle tanks. The heavy tank is a behemoth which employs a pair of tracked chassis, with a single turret mounted on the top. Its key advantage is firepower: The MBT is equipped with a pair of large caliber kinetic cannons using conventional ammunition.

Gameplay article:
none (mentioned in)

The People's Republic of China also employed tanks, which found its match in 2067, in the form of American T-45 power armor units.[9][10]

The Chimera is a heavily modified Alaskan mining rig that was upgraded by the People's Liberation Army to serve as a battle tank in the harsh conditions of the Alaskan theatre of war. The Chimera itself was originally a screw-propelled vehicle intended to negotiate harsh Alaskan terrain. The chassis rests on the screw, with each powered by a separate motor with plenty of clearance between them. A streamlined hull is mounted to the chassis, with a deployable mining rig resting in the middle of the vehicle. The low profile and organic shape make it easy for the Chimera to transverse the tundra in search of oil fields.[11] It is not clear whether the Chimeras were actually developed by the Chinese, as voice clips intended for use in the game suggest their presence was a fantasy implemented by General Chase.[12]

Retaining many of the features of the Mark One through Five tank series, the Mark Eight nonetheless introduced a number of changes to the design, the most important of which was the introduction of compartmentalization, separating the working engine from the crew, shielding them against noise, fumes, and heat. Otherwise, it was a typical First World War line tank: Huge, slow - top speed was just 5.25 mph (8 km/h) - and poorly armored, though with a pair of 57mm guns it could project excellent firepower. It was originally intended for the 1919 offensive against the Central Powers, with initial production runs fielded in Europe as soon as possible, but delays caused it to enter service after the capitulation of the Central Powers. Ultimately, it failed to make an impression and all existing tanks were scrapped by 1940.

The M48 started its life as an upgrade of the M46 Patton and eventually developed into a new type of tank - one of the main medium tanks of the United States of the early stages of the Cold War (1949-1950s). Restricted primarily to United States service, its key upgrade was the replacing of the original power plant with the Continental AV1790-6 engine and General Motors CD-850-4A transmission and the 90mm M3A1 gun of the M46 Patton into the 90mm T54 gun, with later versions bearing the M41 90mm gun and M68 105mm gun. Its only known period of service was during the Vietnam War.[14]