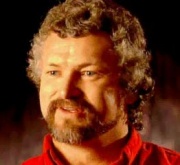 Mark O'Green is a video game designer and developer who worked on both Fallout and Fallout 2. He is well-known for writing most of the dialogues for talking heads, and for contributing to the general plot design of the Fallout setting.

O'Green has a degree in Behavioral Science, has served as a fighter pilot, and is currently a member of SIGMA, a group of science fiction writers founded to consult the government and non-governmental organizations on possible future attacks. He has been a designer, producer and executive producer for Interplay, Sony Online, Sierra/Verant and other major companies.