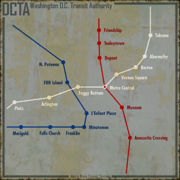 The Washington, D.C. Metro was a mass transit system underneath America's capital and its neighboring communities before the Great War. 200 years later, super mutants, raiders and feral ghouls have flocked to the tunnels, so traveling through the Metro is not without its hazards. Even so, the Metro tunnels are still the most efficient way to navigate between the D.C. neighborhoods as above ground travel is usually blocked by collapsed streets or buildings. There are three Metro lines: Red, White and Blue. Red and White intersect at Metro Central while Blue is completely independent.