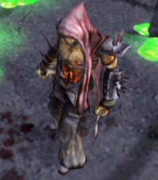 Blake was a the high priest of the ghoul cult known as the Church of the Lost which worships and protects the Secret Vault under the city of Los.

Blake was not ghoulified by the Great War, but was born after the explosion in the Secret Vault. He was originally a security officer for the Vault, but he started a battle with the Vault scientists when he deemed their research was "evil". This resulted in a large explosion which trapped the scientists in the Vault's garden. Blake and his officers (along with engineer Giese) were trapped on the surface where they mutated into ghouls, with Blake emerging as their leader. Blake is unusually large for a ghoul, reaching a super mutant's height if not their bulk. He wears a hood and some bandages, making him appear like an undead demon. He is completely insane and all he can say are religious words that usually make no sense. His weapon of choice is a big, spiked, sword-like staff.