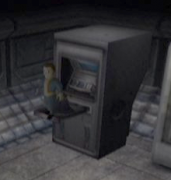 Shop-Tec is a Vault-Tec robotic system implemented in the company's Secret Vault. It consists of a network of terminals which is designed as a shopping interface for the vault dwellers. The system was adapted to accept caps as currency.

Shop-Tec terminals appear like big, arcade-like boxes. When activated, they reveal a CD-ROM-like pod which is actually a holo-projector. The Vault Boy 3D holographic image appears on this pod and interacts with a customer. Even though terminals use the Vault Boy as visual representation, its voice is female. During the attack on the Vault by Attis' army and eradication of nearly every human, Shop-Tec analyzed the situation and collected or created various weapons and items which could be needed by survivors to fight Super Mutants or other wasteland threats.