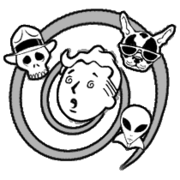 Wild Wasteland is a trait which adds - or in some cases, changes existing - random encounters and locations with a humorous, though not necessary canonical, twist. Players without the trait will find less silly analogues in places where Wild Wasteland modifies things. For example, characters with the trait will encounter an alien ship north of Horowitz farmstead instead of a mercenary camp.

According to J.E. Sawyer, the trait was added as a compromise because different members of the team often suggested 'wacky' content that others thought would be out of place.