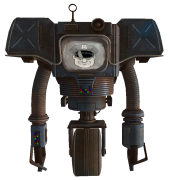 The PDQ-88b Securitron is a pre-War robot produced by RobCo Industries. It is a fairly large, monowheel robot with a titanium alloy housing, resistant to explosive shrapnel and small arms fire. Its form is vaguely humanoid, with two flexible arms and pincers for hands. On the front side is a screen displaying an image of a face, indicating the unit's purpose and alert status.