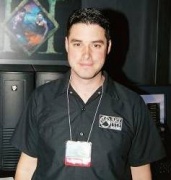 J.E. Sawyer is a video game designer active in the role playing game genre. After Chris Avellone left Interplay, he became the lead designer of Van Buren (the cancelled Fallout 3 by Black Isle Studios) before he himself left in November 2003. While at Black Isle he was known for coming up with the "Ex-Presidents" project naming system.

When Interplay closed down Black Isle Studios many team members ended up at Obsidian Entertainment, which would eventually come to include J.E. Sawyer. There, he was the lead designer and project director of Fallout: New Vegas.