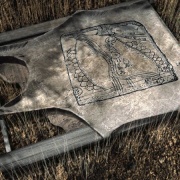 Modoc is a small farming community located west of Vault City. A dwindling collection of survivalists, Modoc is built on the edge of the former Modoc National Forest.

For a long time it traded in leather and meat from Brahmin, but as other places were offering the same goods at cheaper rates, and people began herding and raising their own Brahmin, Modoc has been on the decline. It is mostly a sleepy mountain community, with a centrally located Bed and Breakfast for the traveler. Modoc is beginning to change to a trade city, taking its cue as a stopover place for the Vault City trade routes, but the change may not be enough to save it.