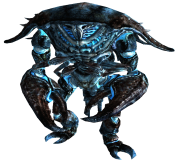 Nukalurks are a rare species of mirelurk with glowing blue features. It is assumed that this coloration is due to the isotope used to color Nuka-Cola Quantum. This seems to be proven by the effects of their delicious nukalurk meat which boosts health as well as Action Points!

Found in large numbers only in the Nuka-Cola Plant, this ancient pre-War bottling factory may serve as both their home, and the birthplace of their species. The majority of these creatures dwell in the lower production level of the factory, which has been flooded with spilled Nuka-Cola Quantum.