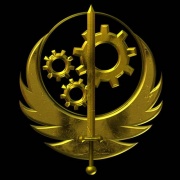 After the defeat of the Master, the original Brotherhood found themselves at odds with their need for new blood versus their code of technological secrecy. Finally, the elders ruled against sharing the technology with outsiders, convinced that they would endure what they had before and the elders ordered the minority on a mission across the wastes. The Brotherhood constructed airships and dispatched the minority eastwards to track down the remaining super mutant threat. However, a great storm broke and the mighty main airship was badly damaged. The fraction of the crew that survived, struggled to keep their ship aloft before finally crashing on the outskirts of the ruins of Chicago. The survivors eventually formed a new organization, which diverged greatly from the ideals of the old Brotherhood.