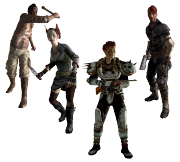 The Jackals are a band of raiders that originated from Vault 15. These raiders also have a splash of tribalism in them as well, having a profoundly savage and cannibalistic nature and only focus on survival. Like other raider groups, they are cowardly and will not attack a group unless they are sure they will be victorious. Though they were once very feared, along with the Vipers, they were almost all destroyed by the New California Republic and the remaining Jackals were again pushed further east, into the Mojave Wasteland.