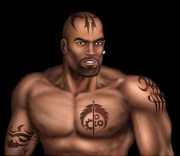 Cyrus is a possible Initate in Fallout: Brotherhood of Steel. He grew up in a semi-tribal farming community, which had its share of problems with raiders, radscorpions, and the like, but was finally devastated by Unity when he was just a boy. So, like a lot of adrift-in-the-wilderness youths, he wandered briefly, hearing stories about the defeat of the mutant army and the forces that opposed them. It was inevitable that Cyrus would eventually go to join the Brotherhood of Steel. As a soldier, Cyrus is a strange combination of idealist and bad-ass and, in short, is the modern-day post-apocalyptic knight.