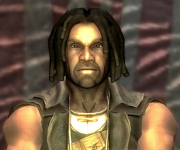 The Twisted Hairs were once a powerful tribe that acted as the primary scouting force during Caesar's Legion's conquest of Arizona. After Arizona was securely Legion territory, Caesar broke the alliance and killed or enslaved the tribals. Ulysses is a former member of the Twisted Hairs, and still wears the namesake hairstyle of the tribe even after being conscripted as in the Legion's Frumentarii upon the tribe's forced assimilation. The braids, knots and dreadlocks the tribe used to fix in their hair apparently held significance and were used to document personal achievements, similar to other tribes and their tattoos.