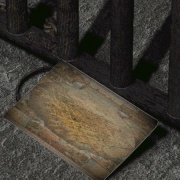 The Den is a dangerous haven of drug and slave trafficking in New California. In some ways, the Den might be considered New Reno's little brother. They are both semi-stable anarchies with no central authority: while the Den is more focused on slaving, and New Reno is more focused on prostitution, they both share an economy dependent on gambling, prostitution, drugs, and slavery. The town is divided into east and west sides, with the merchants and shops on the west side and the Slaver's Guild operating on the east side.