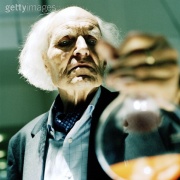 Victor Presper is a mad scientist once affiliated with the New California Republic and is considered to be the most intelligent man in the world. His main goal is to preserve humanity, the master race. When he finally snapped, he discovered the history of Limit 115 and its genocidal potency, thereby discovering a viable means to cleanse the world. Using ULYSSES, the quarantine prison, and a ballistic satellite known as B.O.M.B.-001, the way to human planetary domination and order became clear. He would get to B.O.M.B.-001 and use the nuclear weapons to clean the filth and wretch that currently occupied the surface. He and and his followers grew more and more frustrated with Tandi, the Brotherhood of Steel, the caravans, and everyone else. They just wanted to start over by wiping the slate clean.