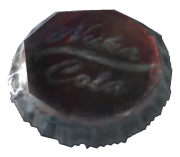 Currencies of all kinds are used in the post-Great War world. Civilization may have crumbled, but the necessity to acquire goods and supplies did not. Bartering only got you so far, so a common medium of exchange was needed to get past this. Scavenged bottle caps from nooks and crannies of the wastes soon became the most popular and accepted medium of exchange, but those that sought to bring civilization back to the Old World economic standard created their own currencies, which serve as the money within that particular region or faction. Although bartering still exists, exchanging currencies is usually simpler, quicker and more accepted.