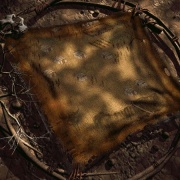 Arroyo is a small isolated village in southwest Oregon founded by the Vault Dweller after he was exiled from Vault 13 by the Overseer, and later the home of the Chosen One. When the Vault Dweller wandered the desert in exile, but never moved far from the mountains that shielded the vault from the rest of the world. Some other members of the Vault, who upon hearing of what happened to him, had decided to leave the vault and join his side, followed him soon afterwards. They knew little of the outside world, and would have died if it were not for his assistance. That's when the Vault Dweller removed his vault suit, never to wear it again. Two months later, the Vault Dweller headed north to the to the great canyons with a small group of vault dwellers and wastelanders and founded the small village of Arroyo. Over time, their ragtag group turned into a tribe. The construction of Arroyo was completed on August 18, 2167. In 2241, the Chosen One, Vault Dweller's grandson, was given the task to find a G.E.C.K. to save Arroyo from starvation in the wasteland. His success would lend to the city's rise to power and size in the following decades.