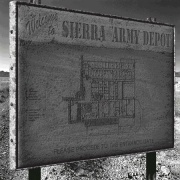 The Sierra Army Depot is an abandoned military installation in California. Its existence is largely forgotten by many of the residents of the wastes, and may have remained lost were it not for its accidental rediscovery by a group of explorers hired by the Wright Family in New Reno. Having never been opened, it is a treasure trove of pre-War military surplus. After being sealed for 164 years, the outer doors aren't being opened any time soon, at least not by conventional methods. Even Skynet, the artificial intelligence unit in charge of the depot, has become bored with the base.