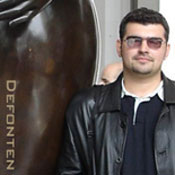 Natiq "Defonten" Aghayev is an artist from Baku, Azerbaijan and a member of the Fallout fan community. His best known Fallout-related artwork, "City Ruins" has often been mistakenly assumed to be a piece of official Fallout 3 concept art by various websites and magazines.

In 2007 he was contracted by Interplay to create concept art for the company's MMORPG codenamed Project V13, working under the supervision of Jason Anderson. Part of one of his images was included on Interplay's "coming soon" teaser page before the company's new website was launched.