From The Vault - Fallout Wiki
(Redirected from Terminals)
Jump to: navigation, search
...

Terminals are hardware devices used for interfacing with computer systems across the Fallout series. Unlike real-world computers, desktop or portable, a terminal typically has no computing power or storage of its own, merely relaying data from the computer it's connected to (although some have been fitted with integrated storage drives and data processing).

In game terms, they serve as scenery objects providing a variety of features, including turret and robot control, providing hints, lore, and other functionality. 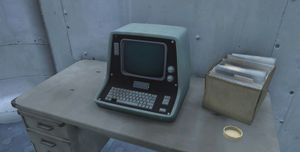 Terminals found across the United States vary greatly in appearance, but are generally similar in terms of functionality. Each computer runs on RobCo Industries' Unified Operating System and communicate with another machine (or its internal components, if it was upgraded with some) via RobCo's Termlink Interface 3.0.[1] All terminal commands are text based. Booting the computer is handled by another RobCo program, the MF Boot Agent v2.3.0, which in turn initialized the RBIOS (the latest pre-War version is 4.02.08.00 52EE5.E7.E8).[1]

There is one, persistent problem with the operating system: anyone with a basic understanding of information technology can use the RobCo Industries Termlink protocol to run the command SET FILE/PROTECTION=OWNER:RWED ACCOUNTS.F, reboot the terminal (with SET HALT RESTART/MAINT) and (with the RUN DEBUG/ACCOUNTS.F command) debug accounts, forcing a memory dump. The user password is always included in the dump, giving the hacker the ability to access protected items.[1] The only fix introduced by RobCo was a lockout feature, which prevented access to the computer until an administrator unlocked it. However, certain hackers learned how to bypass the lock-out, nullifying even that security measure.

Terminals are predominantly scenery objects, both ruined and functional, used in high-tech locations such as Vaults, military bases, research facilities, and so on and so forth. However, they may also have scripts attached, giving them functionality. For example, Vault 13 library terminals can be used to gain experience through research, while terminals in the Mariposa Military Base can be used to manipulate forcefields, robots, and set the base to self destruct. They usually require Science to operate, providing one of the only practical applications for the skill.

From Fallout 3 onwards, the role of terminals has been greatly expanded, making the Science skill and scientific perks more valuable. Terminals control doors, turrets, and safes, contain holotapes and recordings, and are frequently used in quests. Their role has been further expanded in Fallout 4, where terminals are extensively used in settlements to control defenses, manufacturing machines, lights, manage settlers, and so on and so forth.

In Fallout 76, the Hacker perk cards are necessary to hack terminals. Terminals in Fallout 76 work very similar to those in Fallout 4, providing functions including opening safes, controlling turrets and providing additional lore. Some terminals, including ones at Relay Tower EM-B1-27, have special purposes including the ability for players to insert US Government Supply Requisitions into them to spawn a Government Aid Drop from a Cargobot. (Patch 1.1.4.3) With the Personal Terminal, the player now has the ability to check-in with repeatable quest givers, such as Biv and Tipsy Taste-Test, Scout Leader Pompy and Repeatable: Operation Tidy, and Scout Leader Treadly and Repeatable: Stings and Things.

If unprotected, terminals can be accessed by the player with impunity. For this reason, many users use passwords to protect against unauthorized access. 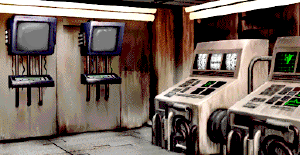 Stationary terminals in a military setting.

These large, unwieldy machines boast three monitors mounted on top of a large console and a hardware box wired to the local power grid and network. Despite their size and immobility, they were a popular choice for military installations and Vaults, as the terminal bulk allowed for integrating a variety of hardware that desktops and other terminal models couldn't. Chief among these were water purification computers with water chips that controlled the purification process for Vault-Tec Vaults,[2] although these platforms were used for a great many purposes. Their size and modularity allowed these machines to be customized for virtually any purpose. For example, high-frequency radio emitters could be used to create control stations for robot WLAN control matrices,[3] while a transmitter for field signaling, a receiver for remote commands, and a standard radio data communications port would create a versatile machine for controlling force fields.[4]

Over time, the use of these computers declined, in favor of terminals slaved to central mainframes. The constant refinement of personal computing and miniaturization also allowed for breakthroughs, resulting in desktop-sized computers that could do the work of a stationary computer without consuming excess amounts of space.

The most popular type of terminal is the RIT-V300, a standalone machine with a large cathode ray tube display (in green) and all the necessary components built into a single, full metal case with an integrated alphanumeric keyboard, four function keys and two knobs for regulating the monitor display. Internally, they are powered by a whooping 64 kilobytes of RAM.[1] The RIT-V300 was spun off into many variants, with some dumb by design, simply providing an interface for a bigger machine, and others designed to incorporate an internal drive, memory, processor, and other hardware, turning them into personal desktop computers. RobCo Industries was at the forefront of personal computing, retaining the external appearance of the terminal, but varying greatly in terms of performance and ability.[5]

RobCo Model NX-12
An old terminal model dating back at least to 2070. By the Great War, it lacked memory or expansion capacity, relegating it to the role of a glorified typewriter or rudimentary game console capable of running text-games only.[7]
RobCo Model E-330
Billed as the "most reliable client terminal ever developed", the E-330 was designed for interacting directly with RobCo-brand mainframes.[8]
Robco Model E-601
A streamlined terminal outfitted with RobCo's business suite, marketed at executives. Each came loaded with a calendar software, contacts manager, and a messaging system. All three were hooked into a Daily Itinerary program, which generated itineraries based on the calendar contents and messages received. The messages system was particularly sophisticated, as it automatically timestamped, branded, and added read receipt requests to each message sent out.[9] Additional functions could be installed by RobCo technicians, such as notifications systems.[10]
Robco Model RX-6550
A personalized home computer for the entire family, allowing each member to keep track of activities and tasks. Privacy was ensured through multiple password-protected user accounts.[11]
RobCo Model RX-9000
The most advanced gaming terminal on the market, featuring an upgraded processor and cutting-edge graphics for the latest holotape games.[12] 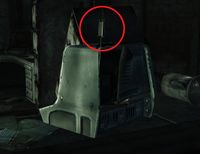 This desktop terminal has been rigged with a grenade to explode when keys are pressed. Activating this terminal will cause it to explode after a brief delay. These are identical in appearance to other desktops, with the sole difference being a rotating antenna protruding from the back of the case.

An Explosives skill of at least 45 (60 if playing Fallout: New Vegas) is required to disarm this trap in return for a single frag grenade and an experience reward. To disarm, the rear panel of the terminal needs to be activated. It can be later rearmed with any grenade.

Manufactured using Institute technology, the terminal is sleeker, offers a higher resolution display, an optional drop-down magnification peripheral, and is available in both desktop and wall-mounted variants.

A terminal variant built with ruggedness in mind. The monitor is housed in a reinforced metal case attached to a wall mount, with a retractable alphanumeric keyboard below. Two side-mounted knobs allowed the user to regulate display intensity. This type of terminal was commonly used for controlling security doors and turrets in high security environments. 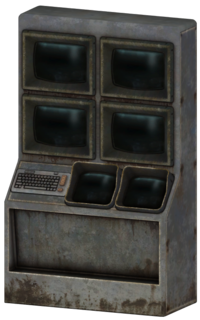 A bank of monitors connected to a single, powerful terminal. used to monitor and control large facilities, such as Hoover Dam or Vaults. Robert House and Benny planned to hack the Hoover Dam central control console to seize the Dam for New Vegas.

An improvised terminal built on the basis of a Holo Scope, mixing in parts from typewriters and a dozen other sources to create a terminal that is surprisingly versatile and functional. 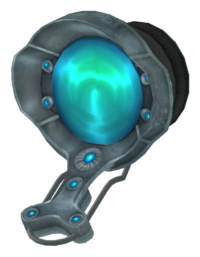 An alien device used primarily for security purposes. Can be rigged to explode with a delayed time fuze or as a proximity charge with a Science check (difficulty varies from terminal to terminal, in the 25 to 75 range), or destroyed with regular firearms.