That Gun is a unique revolver in Fallout: New Vegas.

The following section is transcluded from .223 pistol. To modify, please edit the source page.

The original .223 pistol that became one of the iconic weapons of New California, was originally a full sized .223 revolving rifle, belonging to Irwin, a farmer outside of the Hub. He cut his rifle down to the size of a large pistol, leaving the bolt handle and the original, vestigial trigger intact.[1] This unique weapon offered firepower comparable to a hunting rifle in the compact package of a pistol. Five rounds of .223 ammunition were more than enough to deal with most dangers out in the wastes.[2]

This iconic sidearm caught the eye of gunsmiths and by 2241, and the pistol was deemed profitable for mass production.[3] Vestigial elements were shed to smooth the weapons' profile, and to help further improve performance. The internal mechanisms are retained from the original .223 revolving rifle, modified as needed to create a powerful double-action revolver.[4] 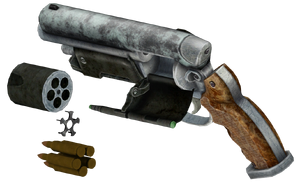 That Gun expanded
The following section is transcluded from .223 pistol. To modify, please edit the source page.

The pistol's most interesting system is its cylinder. Protected by an external gate with LEDs signalling the weapon's status (red safe, yellow reloading, green ready to fire), it is mounted on a mechanized crane. When all five shots are fired (or the operator triggers the reload sequence), the firearm automatically opens the gate and the cylinder extends on the crane outside, allowing for fast, easy reloading with a speedloader.[4]

That Gun boasts a remarkable critical multiplier of x2.5, tied with the unique .357 Magnum revolver Lucky as the second highest of any pistol. That Gun is similar to Lucky, sharing damage and critical multiplier, but has a slightly higher rate of fire and faster reload time, but with higher skill and Strength requirements, higher spread, smaller cylinder capacity, heavier weight and a slightly higher AP cost. It also fires rifle ammunition, making it (alongside its common variant) the only pistol able to use armor piercing rounds.