The Adventures of Captain Cosmos 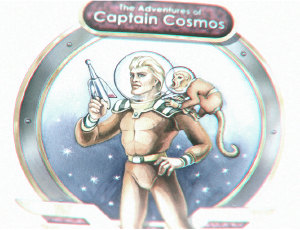 The Adventures of Captain Cosmos was a science fiction television program, radio serial, and comic book by Hubris Comics. It aired in the Capital area prior to the time of the Great War. The serial also had a crossover with the Silver Shroud.[1]

Captain Cosmos and his show appear on various posters and loading screens in Fallout 3, Fallout: New Vegas, Fallout 4, and Fallout 76.

The show aired at 8:00 p.m. on Thursdays (a reference to the original series of Star Trek, which aired in the same time-slot during its first two seasons).

The inclusion of the monkey, while a reference to the wacky plot lines of 50's TV, is most likely a homage to the first mammals in space (Albert and Albert II), also monkeys.