The first part consists of a short story about a character called "Fast Eddie" and concept art. 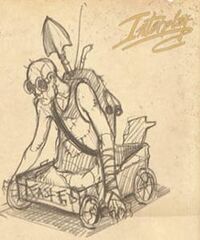 Got your message. Here's what I've found so far. Mixed news. One "guy" in TS recognized the Menkey Butte Mine name. A Ragskin called "Fast Eddie". He isn't, but his mouth is. His instructions are pretty crazy - maybe eyen useless - but if you saw him, you'd think this was the sanest thing he's ever said.

Wrote it all down. You know me, got that gift to pick up every word. First time felt more like a curse.

First thing is call it Monkey Butt Mine everyone does so don't say the other or people will think yer a rube and just fell off the turnip truck, thud. So it's north and west of here, ya see, or west-and-north but that's a matter of choice which is a funny word cause it's like good eatin' like some juicy Brahmin steak, if two heads are better than one, why're Brahmin dummer than dirt? And stick clear of the too far south or you might run into Tickers and they'll take time off your life, get it, get it? Too far north and it's nothing but holes in the ground, holes in the ground, you'll be looking like a ghoul in the holes in the ground and in the middle there's a place where no one comes back from but we don't know for sure so don't go there. But if you do, come back and tell us.

He took a breath here.

What else, what else, oh yeah, there are rumors of radscorpions near the mine but that's not like how the're grouped, you know, like a murder of crows isn't a rumor of rads although I like that and everyone should start using it and say that Fast Eddie said so but if you see writing on the wall, you've found monkeys and not monkey butts, although that's a rumor, too, but not like a rumor of rads, so back up, back up. A mound of monkey, that would be good.

What else, what else, oh yeah, and a finger pointin' to the moon is too far, too, back up, back up there might be some Supes up there and don't make fun of those lip thingies they wear because you might end up like Fast Eddie but that's now what happened to me and don't forget you shouldn't eat yellow sand and don't be a rube, don't take no wooden bottle caps.

Have a nice trip.

He annoyed the hell out of me but I left him as a landmark for when you head up. If I start smiling for no reason, I'll figure you've planted the little Ragger.

I'll keep scouting a path and leave word as I can.