The Pitt allows you to travel to the post-apocalyptic remains of Pittsburgh, Pennsylvania and become embroiled in a conflict between slaves and their raider masters. Explore a sprawling settlement ravaged by time, neglect, nuclear radiation, and moral degradation. The Pitt is filled with morally gray choices, shady non-player characters, new enemies, new weapons, and much more.

The Pitt is the second add-on for Fallout 3, developed and published by Bethesda Softworks.

The Pitt was released as downloadable content on Xbox Live and Games for Windows Live on March 24, 2009. On The Pitt's first release, for some players the add-on was broken and unplayable due to missing textures and freezes. It was then re-released on March 25. It was made available for PlayStation Store on October 1, 2009. For Xbox 360, download codes for Xbox Live are also available in retail.

For PC, The Pitt is available as a disc version as part of the first Fallout 3 Game Add-on Pack, released on May 26, 2009. The pack also includes Operation: Anchorage as well as a Vault Boy poster.

Like all add-ons, The Pitt is included in the Fallout 3: Game of the Year Edition, released on October 13, 2009 for all platforms.

For Steam users, The Pitt, along with all the other Fallout 3 add-ons, is available, released on July 16, 2010. 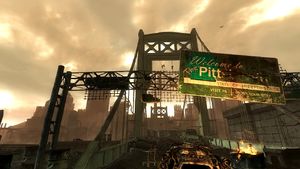 Welcome to The Pitt

In this add-on, the player journeys to the industrial raider town of post-War Pittsburgh, appropriately called The Pitt. In contrast to Operation: Anchorage, The Pitt involves a more traditional quest line with several morally-ambiguous choices.

Although Pittsburgh, Pennsylvania, was not hit directly by atomic bombs during the Great War, the water from the nearby Allegheny, Monongahela, and Ohio rivers soon became highly irradiated. The confluence of these three rivers yielded disastrous results and changed the area's inhabitants in mysterious ways over the following decades. 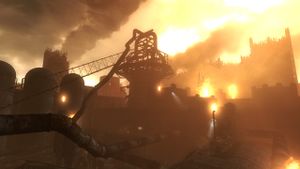 Some 30 years before the Lone Wanderer embarks to The Pitt, Owyn Lyons led the Brotherhood of Steel's expedition to Washington D.C. through The Pitt. In one night, the Brotherhood swept through and destroyed the original raider force occupying the town and rid the surrounding area of other "scum", killing anything that put up a fight. This event is chronicled as "the Scourge". As they cut through the raiders, the Brotherhood also saved several young children, and indoctrinated them into the Brotherhood.

The main objective the Lone Wanderer is given revolves around taking on the role of a slave in order to investigate rumors that the raider boss of The Pitt has discovered a cure for the mutations plaguing the town. These rumors are told to them by an escaped slave named Wernher who believes the cure needs to be in the hands of the slaves and not their raider overlords.

After gathering steel ingots in the derelict steel yard and fighting through a gladiator arena dubbed "The Hole", the Lone Wanderer is given an audience with Ashur, Lord of The Pitt. Being so close, stealing the cure will be easy, although the cure is not quite what the Lone Wanderer expected.