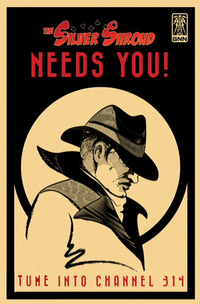 The Silver Shroud was a multimedia franchise focused on the eponymous Bostonian crime fighter. It was popularized as a radio drama by Galaxy News Radio that aired in the Boston area before the Great War. The Silver Shroud's popularity led to his inclusion in The Unstoppables comic book other Hubris Comics properties and even a televised show that was in planning stages in late 2077.

The Silver Shroud was a popular radio drama, featuring a noir superhero fighting villains in modern-day Boston. Written by Tina Hopkins for Hubris Comics and Galaxy News Network, the radio show was a staple of Boston popular culture, though it lacked appeal outside the city.[1] In order to tap into these markets, Hubris Comics decided to create a television show based on the drama, bringing Aaron Babowski, a noted television producer, to aid with the shooting. The work started around October 2077, with Babowski managing to almost instantly alienate Tina Hopkins with the changes he introduced to and the method he used. He made stealth revisions to the shooting script, such as introducing an English butler for Silver Shroud. This was another in a long line of alterations that Hopkins believed would alienate the core fans of the series.[2] On October 11, Hopkins involved Vivian O'Dell in her desperate attempt to contain Babowski and his changes. O'Dell actually supported the changes in order for the series to get to the small screen, but promised her to talk with Babowski, despite believing it to be a lost cause.[1]

Her concerns were not noted by the company, which was more concerned with the general success of the series, rather than retaining their user base. When Hubris agents managed to convince Claire Redelle to accept a role as the Mistress of Mystery on October 14, Evans Richelli and Aaron Babowski decided that such a high profile actress would ensure the success of the TV series. Losing her to Wisemans or other competing companies due to Hopkins standing in the way was unacceptable, and so they would have to ensure that Hopkins would leave the project. Her contract with Hubris was ironclad, so the only way they could achieve it was by making her quit of her own accord.[3] As expected, their choice did not go down well with Hopkins once she received the news the following day. The actress did not fit the Mistress of Mystery in her opinion, no matter what the gross for The Tomb of Amun-Ra was. Apart from being a redhead (as opposed to a brunette, as Mistress was envisioned), she had a shrill, waif voice, completely unfit for a character who's supposed to be a confident match for the Silver Shroud. She preferred Shannon Rivers for the role, who voiced the Mistress in the radio series and even looked the part despite being older than Claire. She promised to quit should Claire remain on the project, much to the satisfaction of the executives.[4] O'Dell promised to intercede on their behalf, and reached out to Babowski via electronic mail to protest Redelle's casting.[5][6]

Babowski was adamant in the reply, claiming the contract with Claire is signed and it's impossible to reverse course. He also casually dismissed Shannon Rivers as unsuitable for the role, based on her age: 20 years late for the role, with a face made for radio, in his own words. Then he also asked for more romance scenes between Mistress and the Shroud. And if the lead writer won't make them, she can be replaced by one of his associates from Hollywood.[7] Peter Shiner, the executive of Hubris Comics, got involved in the project two days later, on October 18, backing Babowski's choice of Claire for the role and the alterations to the costume, while stating that both O'Dell and Hopkins were right: Redelle needed to become a brunette for the series and her voice just didn't fit the character. He proposed dubbing Claire over in post-processing, with Shannon providing the voice.[8]

Rather than acquiesce, Babowski decided to gamble. His message from October 20 was a calculated attempt to push Hopkins over the edge. Beyond adding a monkey in a wig to the script (mocking the suggestion that Redelle wear a wig to cover her fiery red hair), he suggested that the wig be dropped entirely and that Shannon Rivers be dismissed, so as to not annoy the actress (after she delivers her lines as the Mistress, of course).[9] Hopkins' response to such treatment was immediate: She quit, deciding to accept a job offer from Manticore, a competing company. All according to Hubris' plans.[10]

However, their triumph was short-lived, as on October 23, the entire world was scorched by nuclear flame. The TV pilot was never completed.

The Silver Shroud consisted of 420 episodes (419 regular and one holiday special) written with Tina Hopkins as lead writer.[11] Crossovers with other Hubris properties were very popular, particularly ones in The Unstoppables continuity (the 2071 The Silver Shroud vs. Captain Cosmos is one example).[12]

It also included a number of minor characters, such as the cryonic villain Mister Abominable from Episode 83.[13][14]

The only story arc available in Fallout 4, it is divided into six parts. It begins with the murder of Mayor Murphy in Scollay Square. Silver Shroud and Mistress of Mystery kill a pair of thugs responsible for the murder, only to be forced to flee to the Mistress' hideout after Fat Fahey, local crime boss, wounds Shroud in a confused firefight when he happens upon the scene. Although Shroud recovers from his injuries, they are forced to run as Boston Police surrounds the hideout. The duo decides to infiltrate Fat Fahey's operations to learn of his role in the Mayor's death - after all, nobody casually struts through Scollay Square in the middle of the night. Disguising herself as a bar girl, Mistress convinces one of Fahey's gangsters to lead her into his boss' hideout. Once there, she and Shroud try to interrogate the ruffian, only to be attacked by a horde of mobbots.[15]

They emerge victorious after a desperate battle. Fat Fahey turns out to be a robot. The intrepid duo track down his master's location with the help of a damaged mobbot, who craves revenge on his maker. They find the Mechanist at a pier in Boston Harbor, speaking to an army of robots and planning the wholesale destruction of the city. Before they can act, however, they are caught by robots. Suspended over a pit of fire, they are freed by the vengeful mobbot, who gnaws through the rope. The Mechanist attempts to use Silver Shroud's gun against him, but the bullets bounce off his trench coat, mortally wounding the villain. In the closing scene, the Mechanist is revealed to be none other than Mayor Murphy, who faked his own death in order to accomplish his plans.[15]

The Silver Shroud character appears only in Fallout 4 and is mentioned in Fallout 76.

The Silver Shroud as a character, given his appearance and start as a radio program, is heavily influenced by the real-world radio drama and comic book character the The Shadow.