The Tops Hotel and Casino was one of the foremost establishments of the Las Vegas Strip before the Great War. Though ruined by the war, it was restored by Robert House and the Chairmen to its former glory, becoming a mainstay of Strip casino visits by 2281.

Opening alongside the Ultra-Luxe, The Tops quickly became a centerpiece of the Strip before the war.[1] It was well known for its comprehensive coverage of all of its patron's needs, offering great accommodations, dancing, drinks, and, of course, plenty of gambling,[2] though perhaps its most attractive feature was the Aces Theater, constantly attracting fresh talent to entertain its patrons.[3]

After the Great War, the casino was abandoned. Spared nuclear devastation, it was instead left to rot for centuries. Tribes came and went, inhabiting the halls of the gambling establishment, rising and disappearing into the mists of history like the scorching sun of the Mojave. Things changed in 2274, when House detected the first NCR forces at Hoover Dam. Lucky 38 opened and Securitrons deployed to the city en masse. The tribes were offered a choice: Extermination, resettlement, or working for House.[4] The future Chairmen, the Boot Riders, were approached east of Vegas by a Securitron. After initial miscommunication (and the deployment of twenty more), they listened to what House had to offer. That included shelter, food, and medical services. Most of the tribe was against the deal. Benny was all for it.[5] Bingo, the tribe chief, challenged Benny to a knife fight over their disagreement as to the course the tribe should take. The fight took place three days after House made contact. Benny emerged victorious.[6]

The tribe moved to Vegas and began renovating the Tops, bringing it back to life. As they worked, a number of House's Securitrons dropped off boxes with suits, ties, and wingtip shoes, together with a message from their employer announcing they were the Chairmen now. The tribe hated the name, but Benny overrode their decision. As he put it, it was "ciao to the old ways and time to swing in style."[7][8] And swing they did: By 2281, the Tops returned to its role as the mainstay of the Strip, offering everything one could desire and teaching its patrons how to truly enjoy the finer aspects of life.[9] A true classic Vegas experience, with cool, hip, fun, and macho posturing to entice those with a sense of style.[10] Most importantly, the legendary Aces Theater was brought back to life by Tommy Torini, giving a venue for talents from all over the wasteland to perform.[11]

But the Tops was not enough for Benny. Although he was groomed as a protege by Mr. House, he did not share his employer's views on Vegas. He saw the city as a potential for an independent power, not answering to the NCR, the Legion, or House.[12] The Tops became his stronghold, where he planned how to overthrow Mr. House, protected by the contract which expressly forbade Securitrons from entering the premises without invitation or probable cause.[13] To this end, he hijacked a Securitron and set up a workshop in one of the suites on the 13th floor, where he and Emily Ortal conceived Yes Man, a covert tap into House's vast electronic network. Now all that was needed was the right opportunity.[14]

The Tops is the quintessential Vegas casino, roughly divided into two distinct parts. The lower two story building contains the casino, Aces Theater, the courtyard, and the restaurant, while the tall one is the hotel, with thirty stories worth of apartments.

Weapons are confiscated by the door greeter and placed inside the lockers at the cashier's office. Of course, holdout and improved holdout weapons may be retained by the player. Once the player exits the casino, the player receives the weapons back.

Period songs are piped in the background and include Ain't That A Kick In The Head, Blue Moon, Hallo Mister X, Jingle, Jangle, Jingle, Manhattan, Something's Gotta Give, Slow Bounce, and Why Don't You Do Right?. 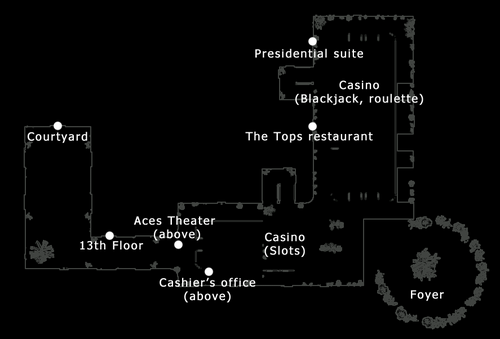 Layout for the lobby and casino

The casino of the Tops is located in the L-shaped building, with a circular lobby holding the reception area. Swank mans the reception as Benny's second in command, with Chairmen greeters ensuring that guests relinquish all their weapons before entering the casino proper.

The casino itself is divided into two distinct sections. The northern wing is a large open space, holding roulette and blackjack tables in the pit. Right next to it are entrances to the Tops restaurant and presidential suite. Patrons may relax in a gallery overlooking the pit.

The other wing is divided into two floors. The lower floor holds the casino's myriad slots machine and leads into the hallways holding high speed elevators (though currently only one is functional, leading to the 13th floor) and an exit into the Tops Courtyard.

The upper floor contains the cashier's office and the Aces Theater.

The player will be permanently banned from casino games if they win 10,000 chips.

Connecting to the courtyard and the casino, the restaurant consists of the dining area, a bar counter, and a kitchen where the meals are prepared. This highly popular dining establishment may not offer the quality of food of The Gourmand, but is rich enough for wastelander tastes.

The bartender has plenty of drinks in stock. Invading the kitchen yields miscellaneous food and drinks, although it does include 5 Nuka-Cola Quartz bottles.

The staple of entertainment at The Tops, The Aces theater hosts numerous acts hired by Tommy Torini. Patrons can kick back, relax, and enjoy with a drink in hand, provided by the well stocked bar.

The presidential suite is the absolute best suite in the entire Tops casino and hotel, fit for any VIP.[15] It is essentially a luxurious flat, offering a conference room, bedroom, kitchen, and, of course, the beautiful main room, among other amenities.

The courtyard is a recreational area, offering a pool surrounded by lush vegetation, including palm trees. Patrons wishing to relax and bask in the sun can leverage the loungers and umbrellas circling the edge of the pool.

The 13th floor contains Benny's personal suite, as well as hotel rooms. High rollers winning it big in the casino may also win the key to the exclusive High Roller suite (requires winning 7,500 chips). Hidden beyond Benny's suite, in a secret workshop, is Yes Man, the key to an independent Vegas, and his personal elevator into Vault 21.

The sub-basement is a small storage room deep beneath The Tops, where Benny blasted his way into the intact portions of Vault 21, establishing for himself a method to enter and leave the Strip unseen.[16][17]

The most important dwellers of the Tops are high ranking Chairmen, including Benny, their leader, Swank, his second in command, and Tommy Torini, the talent agent for the Aces theater. After completing Talent Pool, the Tops will also host Hadrian, Billy Knight, the Lonesome Drifter, and Bruce Isaac, complementing the Rad Pack dancers at the Aces. Last, but not least, Yes Man lurks in the workshop beyond Benny's suite.

Other inhabitants include gamblers and other patrons, enjoying their time at the tops under the watchful eye of the Chairmen. The Chairmen themselves can be distinguished by their two piece suits and automatic firearms strapped at their hips, just to ensure that any threats to security are dealt with swiftly.

The Tops appears in Fallout: New Vegas and All Roads.